The Thompson Submachine Gun: Made for the U.S. Postal Service? 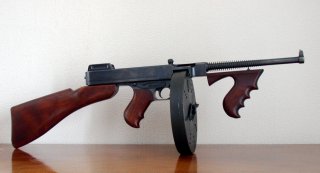 Here's What You Need to Remember: The first U.S. government customer was actually the United States Postal Inspection Service and the weapon was carried by agents to protect mail on trains and in trucks.

During the Second World War, the Thompson submachine gun was used throughout the campaigns in Africa, Europe, and the Pacific. It was used not only by the United States Army and United States Marines Corps but also by the British military. It was a reliable and accurate small arm – but it was one that the military didn't originally want.

The history of the "Tommy Gun" goes back to the First World War when it first developed by John Taliaferro Thompson, who had served in the Spanish-American War as Chief Ordnance Officer. He proved so successful in running the supply operations to Cuba that he was the youngest officer to be promoted to the rank of colonel at the time.

It was during that brief war that Thompson first saw the effects of automatic weapons on the battlefield. Fittingly he was soon appointed chief of the Small Arms Division for the U.S. Army Ordnance Department, and he supervised the development of the M1903 Springfield rifle and chaired the board that approved the M1911 .45 caliber pistol.

For many career officers that could have capped a successful career, but when World War I broke out in 1914 Thompson again began to consider how an automatic weapon could be employed. With the U.S. Army on the sidelines in the early half of the war, he actually retired from the military and took a position with Remington Arms Company as chief engineer and oversaw production of the Pattern 1914 Enfield rifles for the British and the Mosin-Nagant rifles for Russia.

It was while he was working at Remington that Thompson devised a concept for a "trench broom" – a weapon that he envisioned could clear enemy trenches. He then founded Auto-Ordnance Company with his friend John Blish, a former commander in the U.S. Navy.

When the United States entered the war in the spring of 1917 Thompson was recalled to active duty, was promoted to Brigadier General and served as Director of Arsenals. He was in the right place to develop his "trench broom" concept, but the war ended before his prototype, which was known as the "Annihilator" had a chance to be tested.

However, in early 1919 at an Auto-Ordnance meeting, the weapon was rebranded the "Thompson Submachine Gun." It was actually the first weapon to bear the moniker of "submachine gun," even if the German-designed Maschinenpistole 18/I (MP-18) had already had its baptism of fire in the trenches of the recently ended war.

The Thompson Submachine Gun entered production as the M1921 version, but the American military showed little interest. However, another Army showed interest – the Irish Republican Army, which secretly purchased 500 of the new weapons, marking it the first time a military adopted the weapon. The Thompsons were used during the Irish War of Independence and the subsequent Irish Civil War.

Back in the United States, the weapon was then marketed to civilians, complete with 20 round "stick" magazine, while the heavier 100-round drum magazine was typically sold as an accessory. One now famous ad from the time showed a rancher fending off rustlers with a Thompson with the tag line "The Most Effective Portable Fire Arm In Existence." The ad further suggested it was an "ideal weapon for the protection of large estates, ranches, plantations, etc." As shocking as was the fact that Auto-Ordnance Corporation had offices and even a small showroom at 302 Broadway in New York City.

The original price was around $200.00, which was a considerable amount of money in that day and age – and despite what movies might suggest where every gangster had at least one, the customers didn't line up. The cost was simply too high, and most people had no need for an automatic weapon.

The first U.S. government customer was actually the United States Postal Inspection Service and the weapon was carried by agents to protect mail on trains and in trucks.

The United States Marine Corps had first tested the Thompson in 1920, but only in the mid-20s did the Corps finally commit to buying 700 of the new submachine guns. These were used during the Second Nicaragua intervention of 1927-1932, and in China. The USMC was the first to consider how an automatic, close-quarters weapon could be employed as part of a nine-man rifle squad, while the Army finally adopted the weapon in 1928.

As for the civilian market, the use of the weapon in the St. Valentine's Day Massacre in 1929, as well as the fact that it was used in a few high profile bank robberies, including the 1933 Kansas City Massacre that left several FBI agents dead, suggested that maybe civilians shouldn't so readily be able to buy the Tommy Gun.

Legislation was introduced in Congress that resulted in new laws that required automatic weapons to be registered and taxed, but not technically banned outright. The National Firearms Act of 1934 created a $200 tax, which was seen as prohibitive at the time, and covered machine guns, short-barreled rifles (SBR), short-barreled shotguns (SBS) as well as silencers.

Even today the tax remains at $200 to legally transfer a working Thompson and other automatic weapons. As for the price, an original working Thompson from the Second World War or earlier could cost $25,000 to $75,000 today – in line with a luxury automobile.

This article appeared earlier this year and is being republished due to reader interest.