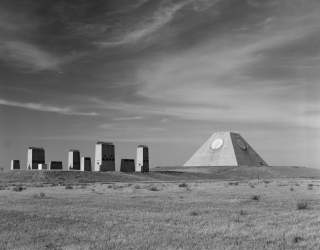 The Stanley R. Mickelsen Safeguard Complex, nestled along North Dakota’s remote northern border, is one of America’s most fascinating examples of military waste.

It’s a pyramid-shaped missile silo that was part of the Safeguard program, an elaborate missile-defense system meant to protect the U.S. from Soviet ballistic missiles. This bizarre building was to be the first of 12 such sites scattered across the country.

The Safeguard program began in the late 1960s as a method of protecting America’s ability to strike back against any attempt to disarm Washington’s nuclear capabilities. Safeguard would detect any incoming threats to the Minuteman missiles.

It was a missile system to protect missile systems. A multiphase-array radar would lock onto any ICBM entering Earth’s orbit … and prepare a Spartan missile for intercept.

On paper, the time from detection to launch was just six seconds. In case the Spartan missiles failed for some reason, the pyramid also held a battery of smaller Sprint missiles. The idea was to detonate the offending ICBM in the air before it hit Detroit or Cleveland or Boise,

Construction of the Stanley R. Mickelsen Safeguard Complex began in 1970. It was the Safeguard prototype—the first of many such installations. But fear of a new nuclear arms race killed the program before assembly of the first facility was complete.

The ABM treaty limited the number of facilities such as the Stanley R. Mickelsen to two per country. Congress—citing mounting costs—killed a second defense array already under construction in Montana.

Five years after the initial groundbreaking, the North Dakota complex came to life. The facility operated for a little under 24 hours before Congress pulled the funding and ended the program.

Total cost to the taxpayer? Just under $6 billion. This 1974 report from the comptroller general details much of the cost, including $112 million in excess materials, $481 million dollars in “lost effort” and $697 million in “schedule changes.”

The Pentagon has always been great at wasting money, but it’s rare that they leave behind something so strange and beautiful. You can still view the pyramid. It’s just off of North Dakota Highway 1 in the small town of Nekoma. The Library of Congress’ Website contains dozens of pictures of the site.

S-500: Is this Russia's Plan to Make Stealth Obsolete?