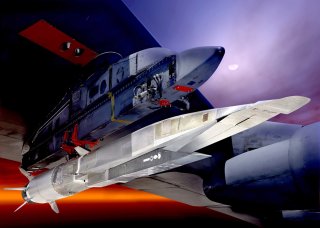 The Pentagon must be sick and tired of hearing about Russia’s hypersonic missiles. It seems like every other day, Russian President Vladimir Putin is boasting about some high-speed superweapon.

But the U.S. Army plans to field a battery of hypersonic missiles by 2023, according to a senior Army official. Hypersonic weapons travel at faster than Mach 5.

The Army weapon, which will perform its first flight test next year, will be a hypersonic glide body fired from a mobile platform. “It is the first shoot ever off of the transporter erector launcher," Thurgood told the Land Forces Pacific Symposium last month.

“The Army plans to field the system to a battery,” according to an Army news release. “That unit, which Thurgood said could include a part of the Multi-Domain Task Force that is currently being piloted and headed by a field artillery brigade, will receive four launchers with two rounds each. The launchers, which are about 30 feet long, will be transported by four heavy expanded mobility tactical trucks, or HEMTTs, and trailers.”

The hypersonic missile’s glide body is under development by Sandia National Laboratories. Glide vehicles are a key part of hypersonic design. Russia’s Avangard uses an ICBM to loft a glider to high altitude, while Pentagon research agency DARPA’s Tactical Boost Glide, uses an aircraft-launched rocket.  will descend to the target at high speed. “In a boost glide system, a rocket accelerates its payload to high speeds,” according to DARPA’s description. “The payload then separates from the rocket and glides unpowered to its destination.”

The Army is developing the glide body as it works alongside the Air Force and Navy on the Conventional Prompt Strike program, which aims to develop a strategic hypersonic weapon that can hit any target on Earth within an hour. “For instance, the Army is teamed with the Navy to develop a booster for the hypersonic missile and is leading a team with the Navy and Air Force to internally build a common glide body and make it producible on a larger scale,” Defense News noted.

The Army has placed a premium on developing long-range fires, including cannon shells with a range of up to a thousand miles. A long-range hypersonic missile would offer the advantage of reaching a distant target quickly – before it has time to move away – and also being harder to intercept by anti-missile defenses.

“With near-peer competitors developing their own hypersonic capabilities, the Army plans to counter them with about $1.2 billion on experimental prototyping through fiscal 2024,” said the Army announcement.

No doubt Russia will vigorously claim that the Americans are merely copying Russian ingenuity, and that Russian weapons are far more advanced. It is true that Russia already fields several hypersonic weapons. The KH-47M2 Kinzhal is a hypersonic, air-launched version of the Iskander short-range ballistic missile, while the Zircon anti-ship missile has Western navies worried that the weapon is too fast to be intercepted by existing shipborne anti-missile defenses.

However, Russian hypersonic weapons have yet to be tested in combat, so it is unclear how effective they are. In a few years, the world may have a chance to see whether Russian or American hypersonic technology is superior.