America’s Military Has a Problem: Russia and China Are Building Hypersonic Weapons 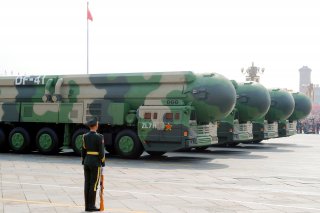 On June 5, the Space Development Agency (SDA), the Pentagon’s new space technology arm, issued a solicitation for the development of an advanced “space-layer” missile defense tracking system. The technical notice arrived with little fanfare, and passed without much public notice. But for those in the know, it reflects the start of a major strategic initiative—one with the potential to safeguard American military superiority.

The problem is acute. Today, America’s preeminence in missile technology is being challenged for the first time since the end of the Cold War. Alongside the United States, the Russian Federation and the People’s Republic of China are currently developing the next generation of kinetic weapons: the hypersonic missile. Hypersonic weapon systems are designed to defeat existing missile defenses through incredible speed—up to twenty-seven times the speed of sound—and high maneuverability (the ability to modify their trajectories in flight).

No effective countermeasures currently exist against these weapons. As our adversaries match—and in some cases exceed—our technological progress in this arena, the Pentagon must prioritize the research and development of a defense against hypersonic weapons.

America’s military might is predicated on its long-distance power projection capabilities—the ability to bring overwhelming force in the form of troops, ships, aircraft, and missiles to any corner of the world in a short period of time. While our near-peer competitors, Russia and China, lack this “expeditionary” power projection, hypersonic weapons offer their militaries a powerful anti-access area-denial (A2AD) tool to deter U.S. force deployment and even threaten first strike “decapitation” attacks against the homeland. It is no wonder that Russia and China—and even second-tier competitors like Iran and North Korea—are aggressively pursuing this equalizing technology.

Hypersonic weapons long ago left the drawing board, and are now being deployed by our adversaries. China’s People’s Liberation Army (PLA) revealed its home-grown DF-ZF medium-range hypersonic glide vehicle (HGV), which sits atop a standard DF-17 medium-range ballistic missile, at a 2019 military parade. While the official system is armed with a conventional warhead and intended to destroy static targets, experts believe it could easily be equipped with nuclear warheads. Anti-ship or “carrier killer” variants of the DF-ZF are also reportedly in development. With a range of 2,500km and a top speed of Mach 10—combined with extreme in-flight maneuverability—the DF-ZFs are designed specifically to defeat U.S. missile defenses like the Aegis BMD that protects our ships or the Terminal High Altitude Area Defense (THAAD) system that defends allied South Korea.

According to experts, the DF-ZF hyperglide vehicle has demonstrated a high degree of accuracy in testing, with warheads landing “within meters” of its intended target. More critically, the DF-ZF prototype is able to take hypersonic evasive action in flight—leaving the adversary with “little time or ability to react.”

Chinese officials have not been shy about its advances in this field, instead lauding their progress on hypersonics as a point of national pride. At a 2017 hypersonic conference in Xiamen, China, Chinese scientists presented more than 250 papers on the topic—about ten times the number presented by U.S. researchers. And in the decade between 2008 and 2018, China is known to have conducted approximately twenty times more hypersonic weapons tests than the United States.

Not to be outdone by its southern neighbor, Russia is also developing its own hypersonic arsenal. On December 27, 2019, Russian Defense Minister Sergei Shoigu confirmed the deployment of the country’s first hypersonic ICBM, known as the Avangard, calling it a "landmark event.” Russian leaders are placing high hopes on the system, and Russian president Vladimir Putin has boasted that the Avangard has the ability to penetrate both current and future missile defense systems. This optimism is well-placed; in a December 2018 test, the missile successfully “zig-zagged” to its target some 6,000km away, traveling at speeds reaching Mach 27.

The Avangard also appears to be technologically more advanced than its Chinese counterpart. Launched by an RS-28 Sarmat ICBM, the Avangard detaches high above the atmosphere and then “glides” toward its target. Additionally, Russia is also nearing the official deployment of its Kinzhal (Dagger) air-launched hypersonic ballistic missile, which reportedly can reach speeds of up to Mach 10.

The United States, spurred by the progress of competitors, is now restarting its Cold-War-era hypersonic weapons program. The Pentagon has asked Congress for $2.865 billion in funding for hypersonic weapons in 2021—a 13 percent increase from the FY2020 total of $2.508 billion. The request includes funding for research on offensive weapons systems like a truck-mounted hypersonic system, missiles for submarines and surface ships, and air-launched weapons.

The Imperative of Situational Awareness

Yet, for the moment at least, funding for hypersonic defense is far less generous. For instance, the Hypersonic & Ballistic Tracking Space Sensor (HBTSS)—which is jointly handled by the U.S. Missile Defense Agency and SDA—currently receives just a fraction of those agencies’ budgets that are allocated for “Space Technology Development and Prototyping.”

Yet given the ability of hypersonic systems to find seams in defenses—traveling under radar horizons or out of range of interceptors until there is no time to react—a new method for tracking is needed to even attempt successful intercepts. This can only really be achieved through a constellation of low Earth orbit sensors, as envisioned by the HBTSS program. Such a sensor layer would include some 120 satellites, allowing for persistent and reliable detection of targets regardless of their course or velocity. This sort of system would guarantee constant “custody” of any targets throughout its launch, and provide necessary real-time data to interceptors in an environment where every millisecond counts.

The problem is pressing. America’s conventional defense systems, like the Ground-based Midcourse Defense system, Aegis BMD, and THAAD, are at present simply not equipped to protect U.S. assets from the hypersonic threat. Traditional missile defense, which is likened to hitting a bullet with a bullet, is by itself a challenging endeavor that requires target tracking, high-speed data communication and interception. The speed and maneuverability of hypersonics make these tasks much, much more challenging. A space-based layer can help improve situational awareness and thereby give existing systems a fighting chance to address the threat. Moreover, the dividends of a space sensor layer would not be limited to missile defense. All branches of the U.S. military would benefit from the ability to better track assets (from ships to troops to aircraft) in an integrated and shared system.

The power to make such a system possible, however, lies with Congress. With proper funding allocated to research and development, lawmakers can ensure that the United States makes space sensing a reality, and does so before our adversaries speed ahead of us.

James Grant is a Junior Fellow at the American Foreign Policy Council in Washington, DC.