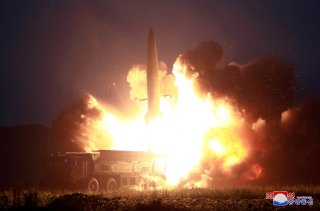 Key Point: The concern is that once Russia and China have perfected their own hypersonic capabilities the technology will begin spreading, as it often has historically with everything from missiles to nuclear weapons technology.

It is extremely likely that Iran and North Korea will acquire hypersonic missiles, according to a senior U.S. general.

Back in April of last year, Lt. Gen. Samuel Greaves, the director of the Missile Defense Agency, testified to the Senate Appropriations Defense Subcommittee. During the hearing, Sen. Susan Collins asked Greaves about the risk that China and Russia’s hypersonic missile technology will be proliferated to countries like North Korea and Iran. “I assess that risk as extremely high,” Greaves responded. “I don’t see what will prevent it from happening.” He added that this is the reason why “the hypersonic threat is something that we need to address expediently.”

Hypersonic missiles travel at speeds greater than Mach 5, or between 3,106 and 15,534 miles per hour. There are two basic types of hypersonics. The first are called hypersonic glide vehicles (HGVs), which are launched into the atmosphere from a rocket and glide to their targets at altitudes of between forty and one hundred kilometers—or even higher. These HGVs typically fly at faster speeds than the second type of hypersonics, hypersonic cruise missiles (HCMs). As their name suggests, HCMs are cruise missiles that fly at hypersonic speeds. During their entire flight, they are powered by rockets or high-speed jet engines like scramjets.

Currently, the only three countries with mature hypersonic research programs are the United States, China and Russia. As Ankit Panda first reported, China conducted two tests of a new hypersonic missile, the DF-17, in November 2017. An unnamed U.S. government source told him at the time that “the missile is explicitly designed for operational HGV implementation and not as a test bed.” The source also noted that this was “the first HGV test in the world using a system intended to be fielded operationally.”

Russia’s President Vladimir Putin also recently claimed that his country has built an “invisible” Kinzhal hypersonic ballistic missile that can travel at speeds of Mach 10. While the United States has refused to confirm Putin’s claim, Gen. John Hyten, the commander of U.S. Strategic Command (STRATCOM), has said, “I can tell you that we have observed both Russia and China testing hypersonic capabilities.” He added: “You should believe Vladimir Putin about everything he said he’s working on.”

The concern is that once Russia and China have perfected their own hypersonic capabilities the technology will begin spreading, as it often has historically with everything from missiles to nuclear weapons technology. Greaves is hardly the first person to raise concern about the proliferation problem. Last year, the RAND Corporation published a pathbreaking study about this problem. The report outlined some of the dangers that the proliferation of hypersonic missiles would create, including forcing nations to adopt risky strategies to avoid decapitation and counterforce strikes. These include the devolution of command and control, which would give lower-level officials the ability to launch strikes, and forcing nations to disperse their strategic forces to prevent them from being wiped out in a first strike.

Unlike Greaves, RAND proposed a clear policy to prevent this future. The report explained that China, Russia and the United States agreeing to not export or co-develop hypersonic capabilities would go a long way to at least greatly slowing their proliferation. That is because there are formidable technical barriers that make developing hypersonic missiles difficult, time consuming and expensive. These barriers include, according to the report, “thermal management and materials [namely, the missiles experience intense heat over prolonged periods of time]; air vehicle and flight control; propulsion for HCMs; and testing, modeling, and simulation.”

Of course, this calls for diplomacy that is outside the purview of the director of the Missile Defense Agency. For its part, Greaves said that the MDA is working with the Pentagon to develop better defenses against hypersonic missiles. He added that Mike Griffin, the new undersecretary of defense for research and engineering, has made hypersonic missile defense a top priority. According to Greaves, defending against hypersonic missiles “starts with birth to death tracking of that maneuvering target.”

To do this, America needs better sensors, with the MDA director repeatedly stressing the need for more space-based sensors during the hearing. As he had previously explained, the curve of the earth limits America’s ground and sea-based sensors’ ability to track missiles. “We have globally deployed sensors today, but—just look at the globe—there are gaps,” Greaves said last month. “What we are looking towards is to move the sensor architecture to space and use that advantage of space, in coordination with our ground assets, to remove the gaps.”

Of course, the unknown variable here is time, as it isn’t entirely clear when the Chinese or Russian hypersonic threat will materialize. Reports have said that U.S. intelligence believes China’s hypersonic missiles could be operational as early as 2020. The technical defenses Greaves is advocating for will also take plenty of time and money to get up and running. The RAND report suggested China, Russia and the United States have at most a decade to come to an agreement that would effectively prevent their spread. But first diplomacy would need to start, and there’s been little indication that is happening.