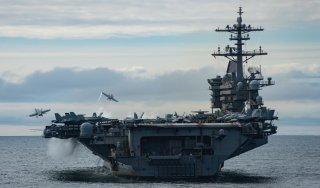 The discourse around the United States’ commitment to Taiwan has shifted from strategic ambiguity toward strategic clarity. This trend has become more explicit recently, with Rep. Elaine Luria (D-VA) effectively calling for a pre-emptive delegation of war powers over Taiwan and former Deputy Navy Undersecretary Seth Cropsey advocating for the United States to plan for a no-fly zone over Taiwan. Advocates of ending the U.S. policy of strategic ambiguity over Taiwan suggest that the United States should state publicly, before any hostilities begin, that it is committed to going to war to prevent China from taking over Taiwan by force. While they are doubtless well-intentioned, proponents of such arguments apparently fail to grasp the grave implications of undermining U.S. strategic ambiguity over Taiwan and the “One China” policy it is based on. The Biden administration and Congress must be clear-eyed about their own respective roles in driving China’s escalatory behavior, and they should assess whether their actions are truly furthering the goal of maintaining the peace over Taiwan.

In recent years, policymakers have behaved as though the United States has already established formal relations with Taiwan and made an overt commitment to its defense. It has done neither. However, a new approach to U.S.-Taiwan relations has manifested itself in several observable changes in official U.S. policy, including the Taiwan Travel Act and the “New Guidelines for U.S. Government Interactions with Taiwan Counterparts,” as well as changes in rhetoric and diplomatic conduct by U.S. officials that clearly deviate from prior practice of the One China policy.

In one recent example, a bipartisan group of lawmakers made a surprise visit to Taiwan to meet with President Tsai in what Fox News described as "an official visit” by “one of the most high-level U.S. delegations to visit Taiwan.” This visit predictably angered China, which launched a large joint military exercise during the visit to express its displeasure, issuing a stern warning that “those who play with fire will burn themselves.” China’s Ministry of National Defense spokesperson called the congressional visit a “provocation” that violated the “One China” principle and the Three Joint Communiques. A Foreign Ministry spokesperson said China’s latest show of force, involving joint combat alert patrols and maritime assault drills in the East China Sea and around Taiwan, was directly targeted at the delegation. A week later, China sent eleven aircraft into the southwestern portion of Taiwan’s air-defense identification zone (ADIZ), the largest such incursion this month. The last time the Chinese military directed an exercise of a similar scale directed at the United States was in November 2021, when another group of lawmakers visited Taipei on a military transport plane.

This most recent jaunt by a mostly Republican delegation, and the military reaction it prompted, came shortly after House Speaker Nancy Pelosi postponed a planned visit to Taipei, which the state-run Global Times said would be “the most serious provocation by Washington to China on the Taiwan question since the island’s then regional leader Lee Teng-hui visited the U.S. in 1996.” (This was a clear reference to the Third Taiwan Strait Crisis, which was a major inflection point in cross-Strait and U.S.-China relations.) The same day Representative Pelosi announced that she had postponed her visit due to a positive COVID test, Chinese foreign minister Wang Yi warned that if Pelosi were to follow through with the visit, it would cross Beijing’s “red line,” and pledged that “China will surely make a firm response and all the consequences will be borne by the U.S. side.”

China’s harsh reactions to such engagements between U.S. and Taiwan officials stem from the long-standing U.S. commitment to only have unofficial relations with Taiwan. In recent years, the Trump and Biden administrations have both pursued an unprecedented shift in U.S. policy and practice toward more frequent, more public, and higher-level interactions between U.S. officials and Taiwan authorities. While the threat that China poses to Taiwan can be partly assessed based on China’s military modernization, China’s actual military actions around the island are not occurring in a vacuum. Indeed, China’s tacit military threats are often signals linked to consistent objections to changes in U.S. policy and practice with respect to Taiwan. China is angered by U.S. actions, and it consistently responds to them with clear military and diplomatic signals to convey its willingness to escalate over violations of its “One China Principle.” U.S. leaders thus need to weigh the political and military consequences of such high-profile official engagements with Taiwan more seriously and reflect on the role of strategic ambiguity in maintaining cross-strait peace.

In a phone call with President Xi in October 2021, President Biden reaffirmed his commitment to abide by what he called the “Taiwan agreement.” Unfortunately, there is no such agreement. Instead, Washington has a tradition of prudence and diplomatic nuance based on its Three Joint Communiques with China, the Taiwan Relations Act, and the now-declassified Six Assurances made to Taiwan. For almost forty years, successive administrations consistently pursued a policy of strategic ambiguity and “dual-deterrence” in cross-strait relations. Strategic ambiguity refers to the practice of not declaring an explicit position on whether the United States would defend Taiwan militarily in the event of an armed attack by the PRC. Dual-deterrence means that the United States has simultaneously deterred the PRC from attacking Taiwan and deterred Taiwan from making any moves toward a formal declaration of independence from China. The core tenet of this approach is the “One China Policy," with all its complexity in balancing good relations with both Beijing and Taipei.

However, for China’s purposes, the meaning of “One China” is straightforward. In the 1972 Shanghai Communique, a joint statement by the PRC and the United States, China declared:

The Taiwan question is the crucial question obstructing the normalization of relations between China and the United States; the Government of the People's Republic of China is the sole legal government of China; Taiwan is a province of China which has long been returned to the motherland; the liberation of Taiwan is China's internal affair in which no other country has the right to interfere; and all U.S. forces and military installations must be withdrawn from Taiwan. The Chinese Government firmly opposes any activities which aim at the creation of ‘one China, one Taiwan’, ‘one China, two governments’, ‘two Chinas’, an ‘independent Taiwan’ or advocate that ‘the status of Taiwan remains to be determined.’

For its part, the U.S. stated:

The United States acknowledges that all Chinese on either side of the Taiwan Strait maintain there is but one China and that Taiwan is a part of China. The United States Government does not challenge that position. It reaffirms its interest in a peaceful settlement of the Taiwan question by the Chinese themselves. With this prospect in mind, it affirms the ultimate objective of the withdrawal of all U.S. forces and military installations from Taiwan. (Emphasis added.)

The 1982 Joint Communique explicitly affirmed that:

The United States also made clear its interest in the “peaceful settlement of the Taiwan question by the Chinese themselves.” The Taiwan Relations Act reaffirmed Washington’s “expectation that the future of Taiwan will be determined by peaceful means,” requiring by law that the United States maintain a robust program of military assistance and commercial and cultural engagement with Taiwan. However, the United States formally severed official relations with Taiwan as a clear, fundamental condition of normal relations between Washington and Beijing. Since then, the U.S. government has exercised due caution in avoiding any appearance of official relations with Taiwan authorities, as such engagements would obviously risk upsetting the delicate diplomatic balance that has sustained peaceful cross-strait relations for decades.

Only since the Trump administration came into office have serious questions arisen over Washington’s long-standing commitment to the One China policy and unofficial relations with Taiwan, contributing to a sharp increase in tensions with China over the past several years. Former President Donald Trump began his foray into high-stakes international diplomacy by accepting a phone call from Taiwan’s president, Tsai Ing-wen, soon after his election, breaking with all past presidents’ efforts since 1979 to avoid the appearance of official relations with the government of Taiwan. While this was initially dismissed by China’s leaders as a "petty trick,” the Trump administration later undertook several other symbolic diplomatic steps that predictably antagonized China.