The Third Taiwan Strait Crisis: The Forgotten Showdown Between China and America 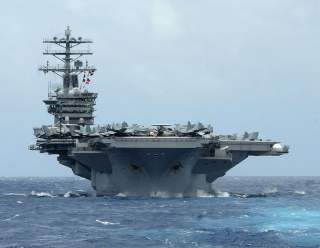 Twenty-one years ago this week, as Taiwanese were readying to hold their country’s first direct presidential election later in March, China flexed its military muscles by holding a series of military exercises and firing missiles within thirty-five miles off the ports of Keelung and Kaohsiung, causing a panic in Taiwan and prompted U.S. President William J. Clinton to deploy a carrier battle group to international waters near Taiwan.

The Third Taiwan Strait Crisis, as the events came to be known, disrupted naval shipping and commercial air traffic, causing harm to Taiwan’s economy. Amid fears of a possible invasion—fuelled by planned People’s Liberation Army (PLA) exercises simulating an amphibious assault and live-fire exercises near the outlying island of Penghu—Taiwanese scrambled to reserve seats on flights to North America.

In the end, crisis was averted, likely due to the U.S. intervention, and Beijing’s efforts to coerce the Taiwanese backfired: Lee Teng-hui, the candidate from the ruling Kuomintang (KMT) whom China suspected had pro-independence inclinations, was elected with a majority instead of the expected mere plurality. According to historians, China’s military threat gave Lee a 5% boost in the March 23 election, the first indication, perhaps, that coercion, rather than cow the Taiwanese into submission, was a counterproductive policy.

Besides exacerbating momentum toward a more Taiwan-centric sentiment across the fledging democracy, Beijing’s military maneuvers (which had begun a year prior in response to President Lee’s visit to the U.S.) likely also convinced Washington of the necessity of providing Taiwan with more means to defend itself as part of its policy under the Taiwan Relations Act of 1979, passed in response to the establishment of official diplomatic relations between the United States and the People’s Republic of China (PRC).

While many historians argue that the mass killings surrounding the 2-28 Incident of 1947 by KMT forces constituted the “birth certificate” of Taiwan as a distinct nation, it could also be argue that the Missile Crisis of 1995–96 represented a breaking point in the Taiwan Strait, when Beijing’s belligerence made it clear it would not countenance the wishes of the Taiwanese to continue down the road of democratization after nearly four decades of authoritarian rule. Years before it became fashionable to do so, China’s actions made it clear that the “one country, two systems” framework, formulated by paramount leader Deng Xiaoping in the early 1980s to handmaiden the reunification of Hong Kong, Macau and eventually unification with Taiwan—was seriously flawed.

Learning from its overreaction and humbled by the U.S. naval deployment, Beijing did not resort to similar intimidation as Taiwanese continued to exercise their democratic right. It even showed self-restraint when, for the first time in 2000, a candidate from the pro-independence Democratic Progressive Party (DPP) was elected in 2000 and re-elected in 2004. Beijing’s rhetoric remained harshly opposed to Taiwan independence, but it had learned that coercion by military means was counterproductive. Instead, Beijing shifted its strategy, and for the next decade and a half it instead attempted to win the hearts and minds of the Taiwanese through economic interdependence, a process that deepened under President Chen Shui-bian of the DPP and accelerated by leaps and bounds under his successor, Ma Ying-jeou of the KMT (2008–16).

Nevertheless, the injury to Chinese pride in 1996, as well as the display of overwhelming U.S. military capability during the Gulf War of 1991, convinced Beijing of the need to modernize its military. The result was an intensive program of double-digit investment, foreign acquisitions (primarily from Russia and the Ukraine) and indigenous resourcing to turn the PLA into a force capable of imposing Beijing’s will within its immediate neighborhood and, eventually, beyond. China’s embracing of an anti-access/area-denial (A2/AD) strategy, supported by the means to enforce such a plan, was a direct response to the humiliation it suffered in 1996 at the hands of what it regarded as a “foreign intervention.”

Thus, a direct line can be drawn between the Third Taiwan Strait Crisis and China’s current efforts to displace the U.S. as the hegemon in the Asia-Pacific. The repercussions of this national trauma reverberate through time and are inarguably part of Beijing’s rationale for creating a new naval architecture all the way to the South China Sea, which it is busy militarizing, and beyond into the West Pacific.

Twenty-one years on, memories of the Crisis—and perhaps the lessons learned from it—appear to have faded. Ask ordinary Taiwanese what happened twenty-one years ago this month, and most will be unable to answer. For most people in Taiwan, therefore, the reality of military force and its implications are now an abstract concept. This partly explains why, despite the existential threat they face, the Taiwanese have not been willing to support spending on national defense that is commensurate with the nature of the external challenge.

On the Chinese side (at least within the elite and the PLA), the humiliation of direct contact with U.S. military may have dissipated, but it hasn’t been completely forgotten and may now serve as justification for the desire to expel the U.S. from the region. Moreover, the cultivation of an expansionist nationalism, added to the belief that China has “arrived” and is deserving of respect as a major power, borders dangerously close on hubris, one of the most powerful agents of national amnesia. Finally, given the failure of Beijing’s attempt to win over the Taiwanese through economic incentives and cultural propaganda (support for unification has been dropping since the early 1990s and reached an all-time, single-digit low last year), combined with President Xi’s statement to the effect that the Taiwan “issue” cannot be allowed to fester indefinitely, may reinforce the notion in some circles that the only way to resolve the conflict is by use of force, in similar fashion to how Russia handled the Crimea issue.

A wavering commitment to national defense in Taiwan, stemming in part from the forgotten trauma of 1996, added to a resurgent China fixated on exorcising past humiliations and doubt over continued U.S. commitment to security and stability in the Asia Pacific, is a recipe for trouble.

Furthermore, China’s ability to coerce Taiwan today is orders of magnitude greater than it was twenty-one years ago. The Second Artillery Corps, the branch of the Chinese military that controls the conventional and nuclear missile arsenal, has made leaps and bounds both numerically and qualitatively; thus, not only has the number of missiles targeting Taiwan increased (according to estimates, the total number is now 1,500 ballistic missiles, plus a few hundred cruise missiles), but the destructiveness and accuracy of those missiles has also improved markedly with the decommissioning of old DF-11s and their replacement with more precise ones, as well as the addition of longer-range DF-15s and 16s. China’s ability to zero down on targets in and around Taiwan has also improved dramatically thanks to much better intelligence, such as GPS and aerial/orbital surveillance. Additionally, the number of platforms from which the PLA can launch attacks against Taiwan has increased and now includes the full spectrum of land, air and sea. And it is now multidirectional, as the PLA Navy (PLAN) and PLA Air Force (PLAAF) have now demonstrated their ability to operate in parts of the West Pacific and therefore on the Eastern side of Taiwan. The December 2016 sortie of China’s first aircraft carrier the Liaoning, which broke through the “first island chain” and looped around Taiwan before transiting the Taiwan Strait on its return home, makes it clear that naval and aerial attacks against the island-nation will no longer originate from a single direction—i.e., the Chinese mainland. Realizing this, Taiwan’s military recently deployed U.S.-made PAC-3 units in Hualien and Taitung to defend eastern parts of the country.

In light of the new nature of the threat and a rapidly changing security environment in the Asia-Pacific, Taiwanese authorities should implement some measures to ensure preparedness. Among other things, it should use history so that the Third Taiwan Strait Crisis, and the lessons learned from it, aren’t forgotten. While it may seem like a long time ago, there is nevertheless a precedent for use of force by the PLA against Taiwan, and the quiet period since 1996 does not signify that Beijing has shelved that option. Although such a scenario arguably constitutes an extreme, military coercion very much remains part of China’s strategy, and the current conditions could make their use seem more appealing to the Chinese Communist Party (CCP) and Chinese ultranationalists. By keeping memories of the 1995-96 Missile Crisis alive with the public, Taiwanese authorities would diminish the likelihood of panic, overreaction—and perhaps surrender—should the PLA once again be called upon to intimidate Taiwan.

Besides China’s growing missile arsenal, which it should be stated does not only target Taiwan, North Korea’s nuclear and missile programs has also awakened the region to the threat. South Korea, Japan, Taiwan, Vietnam and the Philippines are now all potential targets to missile attack by an adversary. Earlier this week, Pyongyang test-fired four ballistic missiles, ostensibly as part of a simulated attack on U.S. military bases in Japan. Meanwhile, in response to the threat from the North, South Korea has agreed to the deployment of a U.S.-made Terminal High Altitude Area Defense (THAAD) system on its territory, with the first units arriving earlier this week. Beijing, which sees a potential use of the system to counter its own missile force (including the possibility that the radar systems could be used to monitor the Chinese military), has reacted with consternation and launched a series of punitive measures against South Korea.