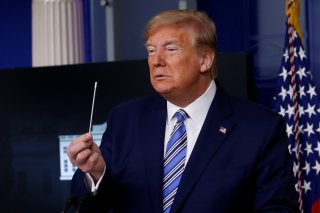 Here's What You Need To Know: The faith in democracy, liberalism, and institutionalism is likely going to decline in favor of a state-centric, and strongman infused system, just as was the case in the interwar era (1918–1939).

The current pandemic has revealed that despite overwhelming wealth, scientific advancement and relative security, the Western world has literally been brought to its knees by an unlikely foe: COVID-19. The world is witnessing in amazement the image of Western governments—ones that they believed to have had the strength to offer ultimate protection, safety, and prosperity to their people—being shattered.

The irony: billions upon billions of dollars of defense investment, from hypersonic missiles to supersonic stealth jet fighters, are being rendered royally obsolete against this enemy because people could not obtain gloves, masks, and early detection kits that cost only a few dollars. For the first time since WWII, the Europeans feel invaded, and for the first time in nearly two centuries, the United States is struggling to defeat an invading army on its soil. All these things considered, the contagion will likely have monumental social, economic, and political impact on Europe and America.

For most Europeans, the bitter fact dawned on them that the motto “United in Diversity,” which signifies the common desire to “work together for peace and prosperity,” is good as long as the bubble of safety, affluence, and wealth is intact. The pandemic revealed the cherished ideal of European unity can easily be replaced by “everyone for themselves.”

Italy, the European epicenter of the pandemic, found itself left for dead by fellow Europeans. Germany blocked the export of emergency supplies and Czechia, another EU member, seized more than 100,000 face masks sent by China to help Italy.

At a time when Europeans ran away from the “plague” stricken Italy, abandoning the country to its fate, Russian president Vladimir Putin didn’t skip a beat, and flew to Rome on March 22 with his two colossal An-22 cargo planes full of medical supplies, that bore stickers with a heart and the words “From Russia with Love.” To further embarrass those who believed that Germany couldn’t help Italy because it too was battling the disease, China, the hardest-hit country in the world, didn’t hesitate sending Italy 300 intensive care doctors and 30 tons of medical supplies. One of the poorest nations in the world, Cuba, sent doctors to Italy.Maurizio Massari, Italy’s permanent representative to the European Union complained, “We asked for supplies of medical equipment, and the European Commission forwarded the appeal to the member states. But it didn’t work.” For now, Italy’s spiking anger for the EU is masked by desperation to save its people. Having already felt abandoned by Brussel’s reluctance to address the refugee influx into their soil, once this is all over, the Italians will seriously reconsider the value of the EU for them, questioning the purpose of their membership. #Itexit is currently one of the most trending tags on social media.

Italy is not alone in its loneliness. Bulgaria’s Defense Minister Krasimir Donchev stated, “As you can see, we have not received a single mask from the European Union so far. We get help from China, from Turkey…” The president of Serbia, Aleksander Vučić, an aspirant EU state, said that, “European solidarity does not exist. That was a fairy tale on paper. I have sent a special letter to the only ones who can help, and that is China…”

The situation on the other side of the Atlantic is not any different. The United States, the world’s superpower with its defense budget larger than the next nine states combined ($618 billion), is severely crippled by, as President Donald Trump acknowledges, an invisible enemy. The notion of pride, freedom, invincibility, and prosperity that the American people are so used to has vanished abruptly as they are humbled by the fear of contagion, confined in their homes by the lockdown orders, and by the reality that they are about to or have already lost their jobs.

More importantly, the pandemic exposed not only the government’s incompetence in disaster management, but also the fragility of the American economy and the inefficiency of its already ailing healthcare. The system that is capable of spending $6.4 trillion dollars on “forever wars” abroad hasn’t been able to prevent American citizens from dying due to an insufficient number of ventilators, test kits, and other relevant medical supplies. Meanwhile, it is as if Wall Street has developed the habit of begging Washington for bailouts almost every decade. The perception that the gluttonous corporations, not the people of America, are the primary recipients of the bailout is aggravating Americans. With free-market principles in Washington being thrashed, the U.S. government will become the owner, albeit temporarily, of private corporations, which is reminiscent of the practice in Russia. The proposed $2 trillion dollars will add to an already morbid $1 trillion deficit, further straining the American economy in the long run. Currently, the U.S. National Debt runs at a whopping $23.6 trillion. Even more disturbing is the skyrocketing U.S. unemployment rates, which may end up topping 20 percent. The weekly increase in new employment claims has already surpassed the increase in any week during the Great Recession, which stretched from December 2007 through June 2009.

So what could one expect in the post-Coronavirus Western world?

The pandemic is likely going to accelerate the demise of the already scarred liberal democracies in the West. As if the refugee influx, ascendant right-wing politics, aging population, and economic stagnation were not enough to render the foundations of a united Europe project shaky, Brussel’s abysmal failure to tackle the pandemic will likely speed up a union-wide insurrection, propelling the Eurosceptic parties to the forefront. With the Brexit example still fresh in our mind, debates about “Itexit” and/or “Spexit” are going to be heightened in the aftermath of the pandemic.

The pandemic has further divulged the clumsiness and inefficiency of the EU bureaucracy, heralding the demise of supranationalism. States and strongmen are increasingly dominating the Western world, and we should get used to it. In Europe, the refugee issue has already produced such strongmen as Viktor Orbán of Hungary and Mateusz Morawiecki of Poland. The combination of the refugee crisis and the spell of Coronavirus on Europe may very well lead to the rise of Marine Le Pen of France, Matteo Salvini of Italy, and Santiago Abascal of Spain—all right-wing, anti-refugee, and Eurosceptic. Orbán is already using the pandemic to seize unlimited power, which many believe will undermine democracy and the rule of law in Hungary.

Let’s remember that the idea of a united Europe, where free trade, democracy, and human rights would reign supreme, was born in the aftermath of WWII out of the conviction that all these values would create codependence, preventing otherwise savage European nations from slaughtering each other.

In the United States, as in Europe, the pandemic will further accelerate the ripening of conditions for a strongman rule. Trump was elected in 2016 with his anti-immigration, right-leaning, and “America First” rhetoric. He has undermined international liberalism by taking aim at international organizations such as the United Nations and NATO, and pulled America out of Trans-Pacific Partnership, the Paris Climate Accord, and NAFTA. He clearly expressed his displeasure with globalism. At home, Trump has displayed autocratic tendencies. The fear and shock the Americans experience during the pandemic is going to nourish the views for a strongman paving way for Trump’s re-election.

The pandemic scare will change the way the people of the West see the world. The faith in democracy, liberalism, and institutionalism is likely going to decline in favor of a state-centric, and strongman infused system, just as was the case in the interwar era (1918–1939). With the United States receding from world affairs, Europe is turning to Russia and China for guidance, which will further help the erosion of the European values. With Trump poised for re-election, the United States, like Europe, if not careful, could lean toward authoritarianism and away from democracy.

Ali Demirdas, Ph.D. in political science from the University of South Carolina, Fulbright scholar, professor of international affairs at the College of Charleston (2011–2018). You can follow him on Twitter @demirdasPhD. This article first appeared last month.