America Needs Turkey More Than It Needs to Stay in Syria 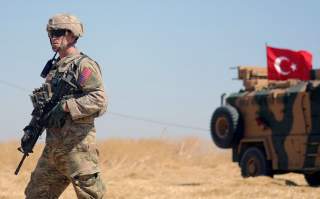 Sen. Lindsey Graham (R-SC) said last month that the United States was trying to get Turkey back into the F-35 program. His public statement was somewhat surprising given that Turkey was officially excluded from the Joint Strike Fighter (JSF) program in July. Also, Congress is still threatening to slap Turkey with the Countering America’s Adversaries Through Sanctions Act (CAATSA) after Ankara went ahead with the procurement of the Russian S-400 Triumf anti-aircraft missile defense system, despite Washington’s relentless efforts to stop them. The proponents of Turkey’s removal from the JSF program argued that the Russian S-400 and F-35 jet fighters shouldn’t coexist as the Russians may be able to have access to the secret codes of F-35. However, Turkey’s foreign minister Mevlut Cavusoglu stated that “the U.S. did not respond to Turkey’s offer to establish a joint commission to check the S-400 anti-aircraft missile systems.”

So, why is the United States changing its mind on its earlier decision to boot Turkey out of the F-35 multinational program? The answer lies in Washington’s growing isolation in the Middle East and the mounting financial troubles the JSF program is facing.

One of the biggest sources of discontent between the two “NATO allies” is the Pentagon’s steadfast backing of the Peoples’ Protection Units (YPG), the Syrian branch of Kurdistan Workers’ Party, which is a top national security threat for Turkey. Washington’s preliminary intent to impose CAATSA was met by Turkey’s grave warning that it would retaliate by staging a major unilateral military incursion into Syria’s YPG controlled areas and form a safe zone. In August, in order to prevent Ankara’s crushing of its allies in Syria, Washington sent James Jeffrey, (its special envoy for Syria) to Turkey. Furthermore, at the G20 Osaka Summit, President Donald Trump and President Recep Erdogan agreed to increase the bilateral trade to $75 billion. These actions persuaded Ankara to give up on an incursion in favor of joint patrols, which started in September. However, a disagreement arose over the distance the joint patrols were allowed to enter (Turkey wanted it to be thirty to thirty-five kilometers in depth while the United States insisted on ten kilometers). Erdogan warned that Turkey’s patience was wearing thin and an incursion is impending. At that point, an estimated two divisions of Turkish soldiers had already amassed along the Turkey-Syria border, making the incursion is more likely than ever. Graham’s offer to get Turkey back into the JSF program must have been seen as a last-ditch effort to bribe the Turks to not spoil the “YPG Project” the Pentagon has been crafting for more than five years.

Graham’s offer should also be viewed from the perspective of attempting to salvage the JSF program as well as the added cost of excluding Turkey. The program has been criticized for being well behind schedule and too costly. Reporter Valerie Insinna noted in her story for the New York Times, that the F-35 is the Defense Department’s most expensive weapons program ever, expected to cost taxpayers more than $1 trillion over its sixty-year lifespan. Despite its gargantuan budget, the F-35 is nowhere near perfect and mired with problems that are affecting its operability. It has been criticized for having less than desired maneuverability and lethal ability (due to the restrictions the embedded weapon bay dictates on the airframe design), having too many software issues, and an unreliable performance record. For instance, in a blow to its cherished stealth reputation, it has been revealed that at high altitudes, the U.S. Navy and Marine Corps’ versions of the F-35 can only fly at supersonic speeds for short bursts of time before there is a risk of structural damage and loss of stealth capability. Insinnia describes it as “a plane that is far less than the sum of its staggeringly expensive parts.” Even former Secretary of Defense Patrick M. Shanahan expressed his dismay in the F-35 program by calling it; “F---d up!” Today, the F-35 program can now be considered “too big to cancel.”

The growing number of incidents have also added to the declining image of the jet fighter. In June 2014, an F-35 burst into flames just moments before its pilot was set to take off, at Eglin Air Force Base near Pensacola, Florida, because the fan blades inside broke off due to overheating. Another F-35 caught fire during an engine start-up at Mountain Home Air Force Base in Idaho. In October 2016, in a first hull-loss accident, a Marine F-35B crashed due to faulty wiring causing a fire in the hydraulics, although the pilot successfully ejected. In the aftermath, the F-35 flights were grounded globally for weeks. Most notably, in April 2019, a Japanese F-35 crashed into the Pacific Ocean. Although parts of the plane were discovered, the pilot is still missing.

These financial, technical, and other political reasons have been creating a difficult time for the F-35 manufacturer, Lockheed Martin, in finding customers it needs to offset the already morbid cost. Earlier this year, Germany dropped the F-35 in favor of all-European Eurofighter Typhoon. Lockheed Martin’s chances in the lucrative European market were further reduced with the rise of joint fighter programs. In June, France, Germany, and Spain unveiled a new generation joint (Dassault and Airbus) fighter program. In July, the United Kingdom, Italy, and Sweden declared their own joint (BAE Systems, Rolls-Royce, Saab, and Leonardo) fighter program, Tempest. This makes it doubtful whether the United Kingdom, the Level 1 partner, will buy the intended 138 F-35s after it officially committed to buying 48. Therefore, given all these potential market losses, it would be financially unwise to keep Turkey, which committed to buy more than 100 F-35 jets, out of the Joint Fighter Program.

Lockheed Martin’s JSF program has a severe spare parts problem too. U.S. Government Accountability Office (GAO) warned in April that only 27 percent of F-35s globally were mission capable (as opposed to minimum required 60 percent). The aircraft cannot perform as many missions or fly as often as required due to spare parts shortages. The parts do not fully match the military services’ needs because F-35 aircraft have been modified so many times. GAO stated that 44 percent of purchased parts were incompatible with aircraft the U.S. Marine Corps took on a recent deployment. These problems have made Turkey’s continuing participation even more necessary. The Turkish aerospace companies produce more than nine hundred landing gear parts and fuselage-related parts. Praising the efficiency and quality of the Turkish parts suppliers, Ellen Lord, the undersecretary of defense for acquisition and sustainment, said that “the F-35 program will likely experience both schedule delays and cost increases if Turkey is pushed out of the program.” Although she added that the Pentagon is still working on ways to ease this issue, she expressed hopes of keeping Turkey in the program.

Today, Russia is doing a very impressive job of pulling the second-largest member of NATO into its orbit, taking advantage of America’s blunders. When the Pentagon continued to steadfastly support Turkey’s arch-foe in Syria, Putin promptly offered his full support for Turkey’s incursion. When Washington announced that Turkey was to be ejected from the F-35 program, Putin promptly offered Turks an irrefutable deal on Russian SU-35. After Lindsey Graham’s recent overture, Trump reiterated Turkey’s indispensability for the JFS on Tuesday (October 8) saying; “So many people conveniently forget that Turkey is a big trading partner of the United States, in fact, they make the structural steel frame for our F-35 Fighter Jet.” It is a clear sign that without Turkey’s continuous involvement in the Joint Strike Program, the Pentagon and Lockheed Martin are going to have a hard time keeping it afloat. Finally, Trump’s decision to pull troops out of Syria and recent signs that Turkey may remain in the F-35 program indicate Washington perhaps has realized that it can no longer be an effective player in the Middle East by further alienating Turkey. With these major roadblocks being gradually removed, there is hope that the Turkish-American relations will rebound.