America Got Off Easy After Iran's Counterattack, But The World Suffered 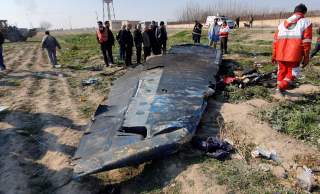 That combined success and blunder suggest Iran’s military and government “human systems” have not kept up with the weapon technology they wield. They also illustrate how missile threats pose challenges to other countries worldwide.

The airplane was defenceless against the apparently Russian-made SAM. The only major airline whose planes carry missile countermeasures is Israel’s El Al. And those are effective mostly against simple heat-seeking SAMs, not sophisticated radar-guided ones.

It’s unclear why IRGC personnel didn’t realize the aircraft was civilian. Their radar should have displayed the airliner’s transponder code. Did the IRGC disable that potentially life-saving feature?

(Iran is not alone in making interception errors. In 2018, Syria used Russian-supplied SAMs to down a Russian airplane they mistook for an Israeli fighter jet. And in 1988, a U.S. warship destroyed an Iranian airliner it thought was a warplane.)

You could call the incident “human error” or “recklessness and incompetence.”

Either way, it indicates problems with organizational co-ordination and communication, rather than the technology itself.

In fact, the IRGC had showcased its technological strengths earlier that day.

On Jan. 8, the IRGC launched between 15 and 22 ballistic missiles toward U.S. military bases in Iraq. Some landed many kilometres off target. But most struck the bases and at least five destroyed buildings. Fortunately, the Americans suffered no casualties because they had taken shelter.

The fact that some missiles never reached the target zone indicates their reliability remains problematic. But the direct hits that others scored shows the growing accuracy of Iran’s missile guidance systems.

Most importantly, the attack demonstrated Iran can strike U.S. targets hundreds of kilometres away. That’s despite overwhelming American military superiority.

Iran’s cruise missiles have achieved similar sophistication. (Ballistic missiles soar high into the air before arcing down toward their targets. By contrast, cruise missiles fly close to the ground like small airplanes — hence the IRGC’s mistake.)

Iran’s successful cruise and ballistic missile attacks represent not only its missile strengths, but also other countries’ vulnerabilities. Even the powerful and well-funded U.S. military has trouble blocking such missiles.

Ballistic missiles’ high-altitude flights are easy to spot on radar. But their fast speed makes them difficult to hit. Even if hit, their downward trajectories mean they might damage targets anyway.

Conversely, cruise missiles are relatively easy to destroy once detected. But their low flying altitudes mean they’re often undetected until too late.

(Capturing launch sites is one way to counter both missile types. That’s how Allied forces shut down Germany’s V-2 ballistic missiles and V-1 cruise missiles during the Second World War.)

The U.S. Army does have medium-range Patriot missile interceptors, but only at a few locations. Besides, that system’s effectiveness against ballistic missiles is questionable. And Saudi Patriots failed to stop the refinery cruise missile attack there.

Consequently, the U.S. Army is developing new short-range missile defences. It’s also buying two interceptor systems from Israel in the meantime. But those aren’t deployed yet.

Meanwhile, most other countries’ armies, including Canada’s, completely lack interceptors. (By contrast, many nations’ warships carry interceptors for self-defence.)

The country best equipped for missile defence is Israel. But even it worries about Iranian developments.

Israel developed its Arrow and David’s Sling systems to intercept ballistic missiles. Its Iron Dome system protects against short-range rockets and mortars. Even its tanks can intercept anti-tank guided missiles.

Iron Dome has seen extensive use against attacks from Gaza. The system was first deployed in 2011 and became really effective in 2014.

But that effectiveness partly relies on rocket inaccuracy. Even when fired at large targets like entire towns, roughly three-quarters land harmlessly in fields. Very few would directly hit buildings. Iron Dome batteries can focus on stopping those few.

That’s one reason Iranian missile improvements concern Israel. Suppose the IRGC were to supply Hamas in Gaza or Hezbollah in Lebanon with precision guidance systems. Those militants could greatly increase their weapons’ accuracy.

Instead of blindly firing rockets at whole towns, the militants could target important buildings like power plants. And instead of worrying about just a fraction of the rockets, Iron Dome units would need to intercept most of them. That could quickly overwhelm their capacity.