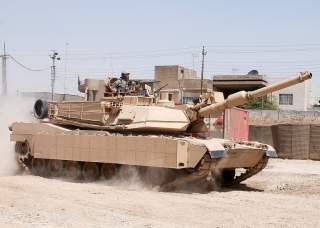 Last week, President Trump visited Lima, Ohio. This is a quintessential middle American town of 38,000. For much of the 20th Century, Lima, Ohio was a center of industrial activity. The city boasted a locomotive factory, construction-equipment plants and the nation's biggest maker of buses. Like many small towns in the so-called Rust Belt, Lima experienced a significant economic decline, beginning in the 1980s.

Lima has one other distinguishing feature. It is the home of the Joint Systems Manufacturing Center (JSMC), the only factory in the United States capable of building main battle tanks. In 2013, a year before Russia invaded Ukraine, the United States came within months of shuttering this national security treasure. As President Trump observed during his visit to the JSMC, “Under the previous administration, this tank factory — the last of its kind anywhere in the Western Hemisphere — came very close to shutting down.” The Obama Administration, believing that the United States no longer faced the threat of conflict with a major land power, sought to save money by terminating the Abrams upgrade program and closing the JSMC for four years. Fortunately, Congressional action prevented the plant from being shuttered. However, the JSMC had to limp along on funding added by Congress. The workforce declined to around 400.

Now, great-power competition is back and with it the need to deter large-scale conventional aggression in Europe and Asia. The Russian military has invested heavily in new capabilities to counter U.S. and NATO conventional forces. New artillery systems, drones and armored fighting vehicles have entered the Russian Army. As a result, according to the Chief of Staff of the Army, General Mark Milley, U.S. ground forces no longer are able to outmatch their Russian counterparts. “It’s close. It’s not overly dramatic but it’s the combination of systems — we don’t like it, we don’t want it — but yes, we are technically outranged and outgunned.”

The U.S. Army needs to restore its superiority in land combat power, particularly in Europe. The Army has given clear priority to modernizing its equipment to reestablish overmatch vis-à-vis potential adversaries. One area in dire need of improvement is armored fighting vehicles. The Next Generation Combat Vehicle program is currently focused on developing a replacement for the Bradley Fighting Vehicle and creating an array of robotic fighting platforms.

Fortunately for the Army, its other heavy fighting vehicle, the M1A2 Abrams tank, still has a lot of life left in it. However, it does require enhancements to stay ahead of prospective rivals. That is why the Army is undertaking a multi-year program to upgrade existing M1A2 Abrams with the state-of-the-art System Enhancement Package Version 3 (SEPv3). According to Major General David Bassett, the former program executive officer for Ground Combat Systems, “The Abrams M1A2 SEPv3 is the first in a series of new or significantly improved vehicles that we will be delivering to the Army’s Armored Brigade Combat Teams. It is a great step forward in reliability, sustainability, protection, and onboard power which positions the Abrams tank and our ABCTs for the future.”

Upgrading the Army’s armored fighting vehicle fleets also means revitalizing the heavy-armor industrial base, particularly the JSMC. The upgrade program, if continued, will energize a supply chain throughout the Midwest and across the country that includes both manufacturers of traditional components such as metal forgings, transmissions, suspensions and engines, and new providers of advanced electronics, sensor and computer systems. It also will support the creation of hundreds of high paying, skilled manufacturing and engineering jobs throughout the Midwest.

The Trump Administration recognized the need to modernize the Army and simultaneously restore the relevant industrial base and create many hundreds of skilled jobs for American workers. In Fiscal Year 2019, the Administration funded the Army for the production of 135 upgraded Abrams. The just-released Fiscal Year 2020 defense budget provides the Army with $1.753 billion to upgrade 165 Abrams. Overall, the JSMC has received nearly $2 billion in new orders for Abrams tanks and Stryker vehicles. As a result, a workforce that had shrunk to just 400 during the recession is likely to top 1,000 again.

The President went to Lima to underscore his commitment to revitalizing both America’s industrial might and its military capabilities. At Lima, these two policies come together. The program to upgrade the M1A2 Abrams to the new SEPv3 standard is part of a broader strategy by the Trump Administration to reverse decades of industrial decline, revitalize American manufacturing and restore the nation’s military preeminence. The program will add hundreds of additional highly skilled manufacturing jobs to the Lima plant. The increased workload will bring hundreds of millions of dollars to Lima and the surrounding region, reduce the per-tank cost for the upgrades, improve the JSMC’s ability to handle surge demands in the event of conflict and, most importantly, prepare the facility for follow-on enhancements to the Abrams in the decades to come.

As the President’s trade advisor, Peter Navarro, wrote in the pages of the New York Times just before the visit to Lima: “The story of the day may be about how the Trump Administration saved the Lima tank plant from a near-death experience under President Barack Obama.” An equally important story is how the President is working to restore the U.S. military in the face of a growing threat from Russia and China. By visiting Lima and the JSMC, President Trump is signaling his continuing commitment to both American manufacturing and a strong national defense.