The Army Is Upgrading 100 M1 Abrams Main Battle Tanks. Here Is Everything We Know. 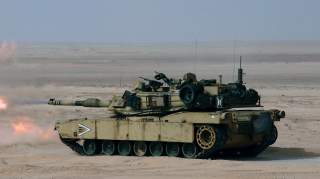 General Dynamics Land Systems has secured a production contract from the U.S. Army to upgrade 100 Abrams main battle tanks into the new M1A2 SEP v.3 configuration. The Army had earlier accepted the first of about a half dozen initial production versions of the modernized main battle tank late last year.

"The Abrams M1A2 SEPv3 is the first in a series of new or significantly improved vehicles that we will be delivering to the Army's ABCTs," Basset said.

"It is a great step forward in reliability, sustainability, protection, and on-board power which positions the Abrams tank and our ABCTs for the future. Even in a fiscal environment that has greatly hampered our ability to move towards entirely new vehicles, the Abrams M1A2 SEPv3 shows we can still deliver meaningful and operationally relevant improvements."

According to the Army, M1A2 SEPv3 improvements include the following:

Auxiliary Power Unit: The under armor APU provides capability to operate on-board systems with a reduced probability of detection during silent watch operations.

Armor Upgrades: The Abrams Tank will continue to advance its ballistic protection to counter the latest threats and maintain battlefield superiority.

The SEP v3 is only the first of several in a series of upgrades to the Abrams. Up next is the SEP v4, as Kris Osborn at partner site Warrior Maven reports. The forthcoming SEP v4 variant—which is expected to start testing in 2021—will include new laser rangefinder technology, color cameras, integrated on-board networks, new slip-rings, advanced meteorological sensors, ammunition data links, laser warning receivers and a more lethal, multi-purpose 120mm tank round, Bassett told Warrior Maven.

However, after the completion of the SEP v4 modification, the Army will have to move on from the long-serving Abrams design. New Russian and Chinese tanks such as the T-14 Armata and the Type 99 are now competitive with the Abrams. Meanwhile, many allied designs such as the Leopard 2A7+ and the latest Israeli Merkava IV Barak are arguably superior to the existing M1 variants.

“We’ve used concept modeling. What are the limits of what you can do? What does a built from the ground up vehicle look like? We are assuming, if we are going to evolve it, it is because there is something we can't do in the current vehicle,” Bassett said.

Thus, the M1A2 SEP v3 represents not only the current zenith of the Abrams design, but it also marks the beginning a transition to a new vehicle.