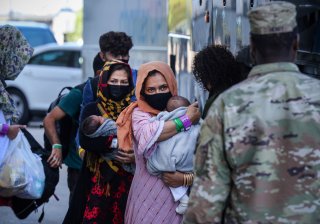 The Biden administration is reviving America’s historic practice of encouraging legal immigration and wants to bring back a robust refugee admissions program. Approximately 70,000 Afghans were evacuated and “paroled” into the United States in August and are now moving from reception centers on military bases to American communities. Although that number may sound like a lot, we should actually admit many more Afghan refugees. By making extraordinary efforts for vulnerable Afghans, we will live up to our humanitarian pledges and honor our historical commitment as well as the contributions of Afghans to our country.

Some will argue that refugees from war zones are a burden or a threat, even though most refugees tend to work hard, are willing to start out by taking arduous jobs, and can be highly entrepreneurial and law-abiding. In fact, studies show that refugees pay more in taxes over their lifetimes than they receive in social welfare benefits. Still, others would argue that highly educated and skilled immigrants should be the priority for admission to the United States in order to boost our economy. However, I have seen firsthand how even vulnerable refugees from many different backgrounds are extraordinarily resilient and can contribute to American society and culture while revitalizing economies with aging populations.

Many Americans know that we owe a special debt to the Afghans who took risks and worked for years as our partners. Veterans argue that the lives of soldiers hinged on trust between Americans and Afghans on the battlefield. Through their actions, veterans say, these Afghans earned not just our gratitude but an escape route and a fresh start, considering how the American withdrawal put their safety in jeopardy in a matter of days. Special immigrant visas (SIVs) have been issued to some of the drivers, interpreters, and other Afghan staff who worked for the U.S. embassy and military. But only a small percentage of those who served alongside American personnel received their papers before Kabul fell, and we need a rescue plan for those SIV applicants who were left behind. In addition, many other Afghans who supported the United States engaged in activities that make them targets of Taliban reprisals. Such individuals include civil servants, election workers, aid workers, women leaders, academics, and journalists. They, too, need a pathway to safety.

I am particularly concerned about human rights defenders and other Afghans who played leading roles in the long and arduous process to build democracy in Afghanistan over the past twenty years. As they stood up for the rights all Americans believe in, the United States should support their campaign for freedom in Afghanistan, even if some must do this from exile or pursue these goals in secret. I’ve recently spoken to several Afghans who find themselves scattered across the globe and in neighboring countries with expiring visas; they must not be pushed back into Afghanistan and suffer torture or death from the Taliban.

Many of those in Afghanistan would qualify to come to the United States as refugees but are trapped. Even if they were to make it to a neighboring country, America’s Refugee Admissions Program takes many months and sometimes years to bring applicants to the United States. The Refugee Admissions Program—which involves UN agencies, U.S. government officials from several departments, not-for-profits, and volunteer groups—is not designed to bring in tens of thousands at a time and is already overstretched. A much more ambitious program to admit large numbers next year and the year after—with bipartisan support from Congress—is required.

Right now, America should be opening its doors to refugees from Afghanistan.

Anne C. Richard is a former Assistant Secretary of State for Population, Refugees and Migration (2012-2017) and is a Distinguished Fellow at Freedom House. These are her personal views.