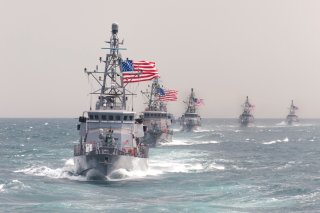 Commander Jim Welsch, the USS Cole’s commanding officer, explained that the "USS Cole looks forward to partnering with the Israeli Navy during the exercise.”

He added that “working with our partners allows us to strengthen our bonds and increase our interoperability. This exercise will allow us to fortify our continued partnership in the region."

The USS Cole has been operating from the U.S. 5th Fleet region since January 4 “in support of maritime security and stability,” the Navy explained in their press release.

The United States Navy’s 5th Fleet encompasses the smallest area of U.S. Navy operations, with responsibility for the Red Sea, the Persian Gulf, the Arabian Sea, as well as some parts of the Indian Ocean. The area also includes “three critical choke points at the Strait of Hormuz, Suez Canal and Bab al-Mandeb.” The U.S. Navy’s 5th Fleet is headquartered in Bahrain.

The USS Cole, an Arleigh Burke-class destroyer, is the same ship damaged during the 2000 bombing in the Yemeni port of Aden. During the terrorist attack, suicide bombers blew a forty-foot hole in the ship’s hull at the waterline, killing seventeen American Sailors.

A Shift Has Been Made

Recent exercises between the United States and Israel have included contingents from the United States Marine Corps, though this particular exercise is purely naval. Intrinsic Defender highlights the growing importance of maritime power for Israel, not just for combatting terrorism but also for protecting assets and interests its near-abroad.