American Carriers May Soon Sail With Up to 20 F-35Cs 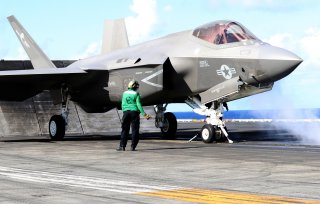 This information comes on the heels of the USS Carl Vinson’s deployment that saw the carrier showcase the “air wing of the future.” The Vinson operated with a combination of fourth- and fifth-generation aircraft to leverage both generation’s unique attributes in the air.

“This deployment, I think, showcased what would be a paradigm shift in the way that the aircraft carrier and the strike group deployed,” Rear Adm. Dan Martin said, according to USNI News. “Since I was a young lieutenant, we’ve been going to 5th Fleet and flying close air support missions for the Marines and the SEALs and Army on the ground, with air supremacy.

Martin said he expects further deployments to include fourteen F-35Cs, but that could later increase to twenty per squadron.

The unique paring gave the Carrier Strike Group better coverage of the battlespace, allowing commanders a fuller picture of the area they were sailing.

While trading helicopters for more stealth fighters could expand the radius of battlespace awareness and strike ability, the tradeoff may hamper search and rescue, anti-submarine warfare, and surface warfare abilities.

Still, when sailing in the South China Sea, Martin said, “you can bank on Chinese ships coming out to meet you,” highlighting the importance of a more robust and networked battlespace awareness and strike capability in the future.