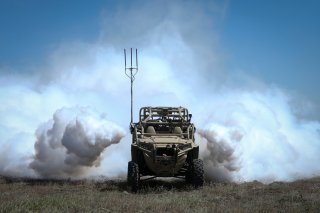 A prominent member of Congress is expressing significant concern that China’s military-oriented AI initiatives could pass the U.S. in terms of sophistication in merely the next several years, absent a more vigorous, sustained, and well-funded effort to stay in front.

Speaking at the opening of an extremely pressing and high-priority joint hearing of the House Oversight & Reform Subcommittee on National Security and the House Armed Services Subcommittee on Cyber, Innovative Technologies and Information Systems,” Rep. Elise Stefanik said “China will surpass the United States in AI leadership and with the innovation race if we fail to invest in emerging technologies.

Intended to address the findings of a newly released National Security Commission on Artificial Intelligence report, Stefanik, who is the ranking member on the HASC Subcommittee on Cyber, Innovative Technologies and Information Systems, cited the report’s conclusions.

In her opening statement on the hearing, Stefanik describes the report’s conclusions as delivering a “profound and disturbing” impact on national security.

“The report concluded that China will achieve superiority over the U.S. within the next decade if we don’t solve our organizational and investment challenges by 2025—just four years from now,” she said.

Stefanik’s comments speak to a pressing issue of great concern to the U.S. military, given the extent and scope to which the services are fast-tracking AI applications to existing and emerging weapons systems. The list of programs, and the anticipated impact upon future warfare dynamics, is far too expansive to describe or categorize in any kind of cursory fashion. However, broadly speaking, the ability to quickly gather, organize and analyze new combat-sensitive information against a vast existing compiled database and, in a matter of seconds, perform the analytics necessary to offer human decisionmakers an optimal series of tactical options, is completely reshaping war planning.

While a single term to describe this phenomenon may seem reductive to an extent, much of it centers upon the word “speed.” The military services characterize this in terms of sensor-to-shooter time, massively expediting, shortening, and improving the rapid-response time available to commanders in war. Gen. Murray, Army Futures Command Commander, told The National Interest in an interview that future warfare is expected to include a “hyperactive” battlefield. This means the force which gets inside or, or completes the decision cycle ahead of an enemy by virtue of being able to discern, analyze and transmit new information, is likely to prevail in warfare.

The fundamental concept of AI-enabled decisionmaking is the primary foundation for the Army’s breakthrough Project Convergence project last September at Yuma Proving Grounds, Ariz. By drawing upon an AI-enabled database called FIRESTORM, Army forces demonstrated a warfare scenario which reduced sensor-to-shooter attack and counterattack timelines from 20 minutes, down to 20 seconds. This means that, if under attack from enemy fire, an Army force will be instantly empowered by fast-analyzed response data outlining recommended courses of action based upon AI-enabled analyses, pairing the incoming sensor data with the right “shooter” or “effector” with which to attack. Project Convergence demonstrated this technical breakthrough in a variety of air-ground warfare scenarios to include the use of ground combat vehicles, forward sensing mini-drone operations, and even satellite connectivity across vast distances.

However, this concept of AI-empowered warfare by no means stops with the Army, but it rather a tactical and strategic premise inspire a DoD-wide Multi-Domain Operations approach to modern warfare. The Air Force’s Advanced Battle Management System, as it contributes to the Pentagon’s well-known Joint All Domain Command and Control, is similarly based upon multi-node, real-time data analysis and sharing across a dispersed, yet interwoven, mesh of otherwise disparate combat “nodes.” Drones, bombers, fighter jets, and ground command centers, ideally, can simultaneously access organized threat data to make instant determinations amid war scenarios.

Both the Army and the Air Force speak to the emerging urgency with which the U.S. military needs to refine, fast-track, and further operationalized AI-enabled technologies, in part to specifically counter rapid Chinese advances.