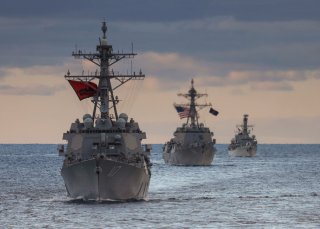 Spokesmen for the People’s Liberation Army (PLA), China’s military, announced on Wednesday that they had monitored and hailed an American warship during its passage through the Taiwan Strait, the roughly 100-mile channel separating Taiwan from mainland China.

The U.S. Navy’s 7th Fleet, normally stationed in Japan, had previously indicated on Tuesday that the cruiser USS Port Royal had passed through the Taiwan Strait as part of a “routine” mission “in accordance with international law.”

“[The Port Royal] transited through a corridor in the Strait that is beyond the territorial sea of any coastal State,” the Navy’s statement read. “Port Royal’s transit through the Taiwan Strait demonstrates the United States’ commitment to a free and open Indo-Pacific. The United States military flies, sails, and operates anywhere international law allows.”

However, the passage of U.S. warships through the Taiwan Strait—usually described by the United States as “freedom of navigation operations”—has inflamed tensions with China, which regards the Taiwan Strait as entirely its own territory, along with Taiwan. The Eastern Theater Command’s statement noted that Chinese forces had “warned” the Port Royal during its voyage.

“The United States frequently stages such dramas and provokes trouble,” the PLA’s statement read. It argued that this practice was “sending wrong signals to Taiwan independence forces, and deliberately intensifying tensions across the Taiwan Strait.”

The Port Royal’s passage took place shortly after a PLA military exercise near the strait’s western bank, a fact that the military’s statement noted. “Theater troops maintain high alert at all times, resolutely counteract all threats and provocations, and resolutely defend national sovereignty and territorial integrity,” it read.

Despite the Chinese statement, the Taiwanese Defense Ministry later claimed that the situation in the strait was “normal,” although it observed that a Chinese attack helicopter briefly flew through the Taiwanese side of the strait on Tuesday.

The United States typically sends a warship through the Taiwan Strait roughly once a month, a practice that has regularly elicited condemnation from Beijing. The Port Royal’s passage was the second such crossing in two weeks; on April 27, the USS Sampson also traversed the strait.

Although the United States does not officially recognize Taiwan, it maintains close diplomatic relations with the democratically governed island. The Biden administration admitted last year that American military advisers were present on the island training Taiwanese troops.