America's F-16 Fighter: Made in India? 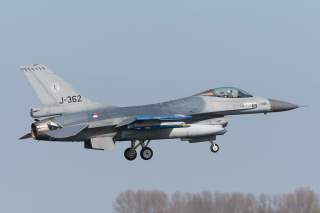 President Trump wants to bring manufacturing back to American shores.

But that doesn't include the components of one of America's prime fighter jets. The F-16 Block 70, the most advanced version of the Fighting Falcon, will have its wings produced in India. Lockheed Martin has partnered with India's Tata Advanced Systems to produce in Hyderabad.

Technically speaking, this will not cost any American jobs, because F-16 wings are currently made in Israel by Israel Aerospace Industries. On the other hand, it's hardly a victory for Trump's call for U.S. manufactured to bring their outsourced production back home.

"This strategic initiative positions Tata Advanced Systems Limited (TASL) to become the provider of wings for all future customers," said a Lockheed Martin statement. "This is a strategic business decision that reflects the value of our partnerships with India and the confidence we have in Tata."

Lockheed Martin spokesman told the National Interest that "it will take approximately two years for Tata to demonstrate this manufacturing capability and become a certified Lockheed Martin supplier. The opportunity for wing production occurs once that is completed, projected to be late 2020 or early 2021."

This isn't the only manufacturing change for the F-16 Block 70 (and the Block 72, a similar model with an engine made by Pratt & Whitney instead of General Electric). Lockheed Martin is moving F-16 assembly from Fort Worth, Texas to Greenville, South Carolina.

The F-16 Block 70 scored its first sale in June, when Bahrain ordered 16 jets in a $1.1 billion deal, followed by a 14-jet purchase by Slovakia, which opted for the U.S. plane over Sweden's Saab Gripen.

"We are also proposing the F-16 Block 70 for the Bulgarian Air Force and we’re in discussions with numerous other customers about new production F-16s, and F-16V [the Viper version] upgrades," said Losinger. "We see F-16 production opportunities totaling more than 400 aircraft, including the potential F-16 Block 70 order for the Indian Air Force."

The F-16 is hardly the only aircraft that uses foreign-made components, noted Richard Aboulafia, an aviation industry analyst for the Teal Group consultancy. Aboulafia pointed to Boeing's F-15, which uses numerous foreign-made parts, including Israeli-made rudders and doors, and Japanese- and Korean-made components for jets used by those nations.

U.S. aircraft manufacturers need free trade to sell planes overseas, which puts them on a collision course with Trump administration's Buy America policy. "This is a risk all aerospace manufacturers face: the need to grow the market and live in a globalized industry while placating a nationalist administration that doesn't understand business," Aboulafia told the National Interest.