America's New B-21 Stealth Bomber Is Just Two-Years Away 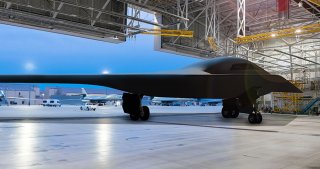 The much anticipated, high-tech B-21 bomber will “come on in two years,” bringing new dimensions of stealth, software, attack possibilities and nuclear deterrence to the U.S. Air Force. It would even possibly usher in new tactical approaches to how modern operations may move forward in the years ahead.

In a conversation with The Mitchell Institute for Aerospace Studies regarding the importance of modernizing the nuclear triad, Air Force Chief of Staff General Stephen Wilson confirmed that the stealthy new aircraft will “come on in two years.”

There has been discussion about its first test flight being imminent, and service weapons developers consistently express that the program has been progressing very successfully for several years now. Naturally details regarding its specific developmental nuances are likely not available, as it is a black program. However, prototyping, software development and the overall success of the program has been well-documented. Given all of these factors, it would by no means be surprising if the B-21’s readiness for operations was merely a few years away. Senior weapons developers have long said the aircraft is expected to arrive in the 2020s, so indeed it may very well be on the earlier end of that.

During the visit, Roper commented on the extent to which the B-21 will bring new dimensions to stealth attack, saying it will “push the boundaries in hardware technologies, like stealth,” and “blaze new trails in agile software development,” according to an Air Force report on the visit.

Roper has long-been an advocate for software modernization as a technical foundation for rapid, agile modernization; he recently published some significant comments about the B-21s progress regarding software and key elements of mission command, saying that developers recently completed an essential software-empowered process intended to bring greater levels of information processing, data management and computerized autonomy.

While few details are available regarding the B-21s technical composition for obvious reasons, there are some interesting comments made by Air Force developers as well as observations that can be made by simply looking at available images.

Through virtualization and software-hardware synergy, B-21 sensors, computers and electronics can better scale, deploy and streamline procedural functions such as checking avionics specifics, measuring altitude and speed and integrating otherwise disparate pools sensor information. In effect, it means war-sensitive sensor, targeting and navigational data will be managed and organized through increased computer automation. This will allow pilots to make faster and more informed combat decisions.

In previous statements, Roper has referred to the B-21’s inclusion of “Containerized Software,” something which refers to an ability to program computer operating systems to streamline and compartmentalize different functions simultaneously, yet without launching an entire machine for each app, according to “Kubernetes’” website. Roper cited Kubernetes, which is a computer system for “automating application deployment, scaling and management.” Much of this, as cited by Roper, is made possible through what’s called application containerization; it is defined as an operating system-level “virtualization method used to deploy and run distributed applications,” according to Techtarget.com. Containerization enables multiple “isolated applications or services to run on a single host and access the same operating system.”

By drawing upon software-enabled virtualization, systems can upgrade faster, reduce their hardware footprint and better employ automation, AI and machine-learning applications. In all-out warfare terms, this means B-21 pilots can share information and find and destroy targets such as enemy air defenses much faster than ever before. This is something which can expedite precision weapons attack and identify approaching air and ground threats and, perhaps of greatest importance, keep pilot crews alive.

While many of the details regarding the B-21s stealth technologies remain mysterious, a quick look at its configuration seems to indicate a few interesting new developments. The engine “inlets” are more curved and embedded in the fuselage, compared to its predecessor the B-2. The body surrounding the inlet appears more rounded and slightly less angular as well, suggesting newer methods of implementing “low radar signature” stealth engineering. Naturally, fewer edges, angular shapes or protruding structures are likely to generate much less of a return signal to enemy radar. Also, the back of the aircraft seems to show little or no heat dispensing, as if to suggest that an internally-buried engine is emitting an even smaller heat signature than the current state-of-the-art stealth engines. Or, there simply could be new ways of managing how heat is dissipated or released from the aircraft to lessen or remove any detectable heat signature. In addition, to be less “findable” by enemy sensors, a stealth fuselage is built to effectively mirror the surrounding atmosphere in order to eliminate any detectable temperature difference. Finally, the structural shape of the crew’s command center cockpit on the B-21 seems to have a slightly lower incline than the B-2, making the shape slightly more rounded or “blended” into a seamless, less detectable configuration.