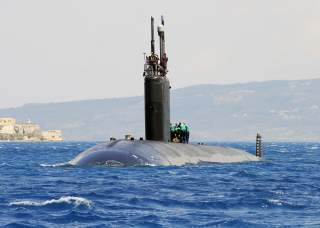 The U.S. Navy quietly is testing out a new way of supporting its fleet of nuclear-powered attack submarines during their months-long patrols in dangerous waters.

The sailing branch is experimenting with a new class of cargo ship in order to determine whether the vessels can pull extra duty as submarine tenders.

On March 11, 2019 in Apra harbor on the Pacific island of Guam, the Los Angeles-class attack submarine USS Oklahoma City moored alongside Military Sealift Command's Lewis and Clark-class dry cargo ship USNS Cesar Chavez for what the Navy called "the first of many evolutions designed to evaluate supply ships’ ability to sustain submarine operations in an expeditionary setting."

The demonstration was completed to show that a submarine could safely go alongside a dry-cargo class ship, which could facilitate the transfer of weapons, stores, critical repair parts and provide the ability to support crew rest.

The Navy and Military Sealift Command together operate two Emory S. Land-class submarine tenders, the survivors of a three-ship class.

Both active tenders operate out of Guam alongside Oklahoma City and three other Los Angeles-class attack boats that represent the Navy's most forward submarine flotilla. The Guam subs presumably spend most of their six-month deployments patrolling waters near China.

But the 644-feet-long sub tenders both turned 40 years old in 2019, making them some of the oldest vessels in the Navy. They eventually will need replacing. The Guam experiment points to one possible option.

Military Sealift Command, the quasi-military transport and support branch of the Navy, operates 14 Lewis and Clark class cargo ships. 689 feet long and displacing 45,000 tons of water, the Lewis and Clarks are much larger than the tenders are -- and much more modern. The cargo ships entered service between 2006 and 2012.

The Lewis and Clark class primarily performs the dry-cargo mission, hauling food, parts and other supplies to Navy battle groups sailing far from their home ports. But the Navy designed the Lewis and Clark class to be flexible. Crews quickly can reconfigure the ships' vast cargo holds with special modules, transforming the cargo ships into floating hospitals, humanitarian-aid vessels or commando bases.

In 2009 one Lewis and Clark-class vessel served as a temporary floating prison for Somali pirates whom the Navy had captured in the Indian Ocean.

If the Guam trials prove that the Lewis and Clark-class ships also can support submarines, then the Navy could replace its two purpose-built tenders with 14 cargo ships that support subs when necessary, much in the way the Navy’s dozens of logistics ships routinely rendezvous with surface ships. "I am hopeful that this demonstration ... in the years to come will prove that submarines can be replenished at sea just like any other warship," said Cmdr. Steven Lawrence, Oklahoma City's skipper.

The tests are ongoing. "Eventually we hope to expand on the demonstration to include large equipment transfers and parts," said Lt. Cmdr. Andy Valerius, the logistics demo planner.

"The ability to moor alongside a supply ship is a critical capability. If we could get parts and food stores from a dry cargo ship, it would reduce our dependence on our two submarine tenders, create significant cost savings and greatly enhance our ability to operate for a longer period of time away from major ports."