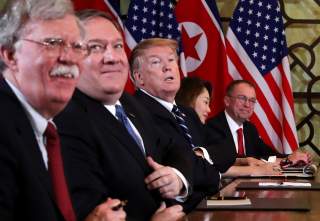 Editor’s Note: Please see other past North Korea symposiums featuring a collection of essays on what U.S.-North Korea relations will look like in 2019 as well as 76 different predictions on the now past Hanoi Summit.

Some have called it the Hanoi Holdup. Many have called it a total failure. Others, such as myself, were hopeful that history would be made. Personally, I had big expectations going into the second summit between U.S. President Donald Trump and North Korea’s Kim Jong Un.

Nonetheless, we are once again at a familiar place in U.S.-North Korea relations: another crossroads where dialogue could turn into disaster, or where failed talked in Hanoi could spark a flurry of diplomacy, with both sides realizing a repeat of the events of 2017 may not end in summitry, but a series of escalatory incidents where neither side feels they can walk back from the brink.

As we have done on two separate occasions over the last few months, The Center for the National Interest’s New Korean Studies Program in partnership with The National Interest asked the world’s best experts the following question: Where do U.S.-North Korea relations go in the aftermath of the Hanoi summit?

Below, you will find a varied collection of the all responses we received to this simple yet important question. Special emphasis in our outreach efforts was placed on reaching out to voices in Korea, scholars outside of the United States and especially the beltway. In addition, we focused on ensuring gender balance, seeking out the top female voices across the globe.

Thank you to all who participated.