'Amoeba Warfare': How the U.S. Military Could Use Drone Swarms in the Next War 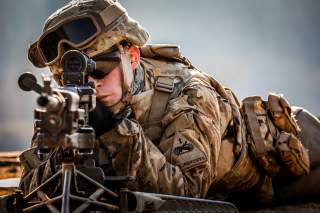 Drones have been used in conflicts across the globe and will play an even more important role in the future of warfare. But, the future of drones in combat will be different than what we have seen before.

The U.S. military can set itself apart from others by embracing autonomous drone warfare through swarming — attacking an enemy from multiple directions through dispersed and pulsing attacks. There is already work being done in this area: The U.S. military tested its own drone swarm in 2017, and the UK announced this week it would fund research into drone swarms that could potentially overwhelm enemy air defenses.

I propose we look to the amoeba, a single-celled organism, as a model for autonomous drones in swarm warfare. If we were to use the amoeba as this model, then we could mimic how the organism propels itself by changing the structure of its body with the purpose of swarming and destroying an enemy.

Skeptics will argue this is impossible or far-fetched, asserting that we can't possibly mimic a tiny organism, for which you need a microscope to view. Yet, we can and the amoeba is the perfect organism to use in developing an algorithm or model for autonomous swarming drones. The anatomy, movement, reproduction, and digestive functions of the amoeba demonstrate how it is the ideal model for a swarming algorithm.

For example, in the video Amoeba meets Stentor, we see how the amoeba hunts and digests its prey. Imagine the amoeba, a jelly-like blob, as a collection of autonomous drones in a swarm. Picture the tiny black dots as drones where they swarm and encircle an enemy. In my opinion, this video brilliantly demonstrates its effectiveness in warfare.

Amoebas look like blobs and possess features that could serve as the basis for a swarming algorithm. These features include: cell membrane, cytoplasm, nuclei, vacuole, and pseudopodia (false feet).

Think of scout or probing drones communicating back to the command center.

The cytoplasm is where all the contents of the cell reside and are located within the borders of the cell membrane. In an amoeba, this is the gel-like structure and serves as the medium to move things back and forth. Think of this as a medium to communicate, thus allowing drones or information to move within a swarm. The cytoplasm also provides the support to stretch the border.

In swarm warfare, the cytoplasm would be penetrating drones allowing the swarm to stretch and change its shape.

The nuclei contain the cell information and operate similarly to a command center. It is one of the most unique and prominent organelles in the cell. The uniqueness is its ability to change location and to separate into distinct cells. In swarm warfare, we could change the actual command center whenever needed or simply change the location of the command center. The nuclei could be a drone, a combination of drones, or an imaginary border similar to the cell membrane and cytoplasm. If an enemy were to take out the central node, then the node would simply change.

The vacuole is used for many different purposes in the amoeba. For example, it is responsible for things, such as nutrient storage, waste disposal, and exerting pressure against the cell wall. Vacuoles are essential in a cell for growth and cell elongation. They are also used for storing and releasing chemicals, to include poisonous chemicals.

Refer back to the video mentioned earlier and imagine the numerous black dots floating around the cytoplasm of the amoeba as drones (vacuole). Think of how drones could exert pressure on the invisible boundary (cell membrane) allowing for the growth or elongation of the false feet or finger-like boundaries that are being created to encircle and devour an enemy.

Furthermore, these drones could be used to leave signals similar to how ants leave pheromones. In what would be a controversial addition, drones could also be used to store chemical-type weapons or even allow for a chemical-type mist to exist within the cytoplasm (similar to the gel-like substance in an amoeba's cytoplasm). This could serve as a powerful internal weapon deadly to any enemy engulfed inside the swarm. To be clear, I'm not proposing we use chemical weapons, instead, we should learn how an enemy could potentially use this type of attack so that we are prepared for it.

As mentioned earlier, an amoeba can form extensions of their cytoplasm. This is known as false feet or pseudopodia and is used for movement and capturing food. Think of this as the barriers being elongated similar to how our fingers extend from a fist. The drones inside the barrier are constantly changing the invisible barrier in order to prepare for an attack.

One of the most unique and interesting aspects of the amoeba is how it can propel itself by changing the structure of its body. If we were to use autonomous drones in swarm warfare, we would need to develop an algorithm allowing for a swarm to move and attack in a similar way. We would need a swarm of drones to propel and attack by changing the structure of its body.

Amoebas capture food with their pseudopodia, where they encircle and engulf their prey. This process is known as phagocytosis. Here the vacuole forms around the food. The process occurs in four simple rules:

Amoebas reproduce by the asexual process of binary fission. Here, a single cell divides into two identical cells. The parent nuclei divide into two distinct nuclei, which then allows the cytoplasm to divide creating two separate amoebas. In swarm warfare, the swarm central node or command center can change or divide at any time. The swarm would be able to essentially clone itself when needed. The movement of the swarm will also change the location of the central node or command center. The ability to change or divide at any time would prevent an enemy from taking out one node leading to the destruction of the swarm.

As crazy as it sounds, using the amoeba as a model for swarm warfare makes sense.

Amoeba warfare or swarm warfare would inflict massive damage to our enemies, yet reduce exposure to U.S. troops at the same time. This idea would undoubtedly be a controversial one, but I think it's one that should be given considerable thought.

The "Mad Major" Jamie Schwandt, U.S. Army Reserve, is a logistics officer and has served as an operations officer, planner and commander. Schwandt is a Lean Six Sigma Master Black Belt, Red Team Member, and holds a doctorate from Kansas State University. This article represents his own personal views, which are not necessarily those of the Department of the Army. Follow him on Twitter @DrSchwandt