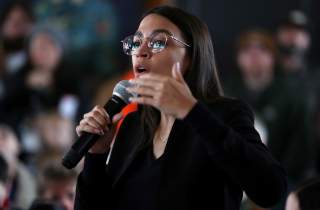 In a press conference this afternoon, freshmen Representatives Andy Levin of Michigan and Alexandria Ocasio-Cortez of New York announced their new bill, the EV Freedom Act. If passed, the law would finance a national system network of electric car chargers along the interstate highway system within five years.

As of March 2019, there are 1.18 million EVs (electric vehicles) in the United States, currently totaling over 2% of the motor vehicle market share in the country. The most popular state for EVs is California. With only 12% of the population, the Golden state represents half of all electric car purchases in the United States. The local market share is closer to 8%. Levin and Ocasio-Cortez argue that the lack of EV friendly infrastructure prevents the market from expanding, due to the “range anxiety” that comes from long distance driving.

“President Dwight D. Eisenhower once implemented a radical idea. A national system of highways that brought this country together. Today that highway system affords every American the freedom to drive from any point in our country to any other,” said Rep. Levin in a launch video released today. Eisenhower, a moderate Republican, oversaw the initial implantation of the Federal Aid Highway Act of 1956, which at the time was the largest public works project in American history.

The EV Freedom Act “embodies the core principles of what the Green New Deal is all about,” explained Ocasio-Cortez, adding that it “opens the door for electric vehicles not to just be in the realm of the wealthy, but accessible to everybody.”

The Green New Deal is a term that has been used for several years, but became associated with Ocasio-Cortez last year when she released her own version of the plan. Her conception, which is to fulfill all U.S. energy needs with renewable energy sources within the next decade, between $8 trillion and $93 trillion depending on how much of it is implemented. The current GDP of the entire American economy is $19.39 trillion.

There is currently no price estimate for the EV Freedom Act. Senator Bernie Sanders of Vermont, the current frontrunner for the 2020 Democratic nomination, has promised a similar goal, in which he would allocate $85.6 billion to creating an electric charge network “similar to the gas stations and rest stops we have today.”

While the primary goal of the Green New Deal is curbing fuel emissions and combating climate change, it explicitly intertwines its policies to promote other goals of the Democratic Party, including social justice. In this regard, Levin has assured people that all-electric charger infrastructure will be built by union workers “with robust ‘Buy American’ and wage protections.” Union membership in the private sector is roughly 6% of the U.S. workforce.

The bill currently has no Republican cosponsors and is unlikely to pass the Republican-majority senate before the election this November.