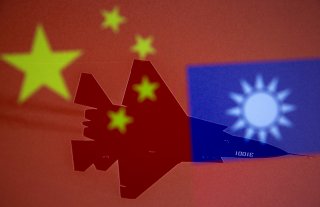 President Joe Biden said on Thursday that the United States would defend Taiwan against a Chinese military invasion, a departure from the longstanding U.S. policy of “deliberate ambiguity” on the subject.

In a CNN town hall, when directly asked if U.S. troops would intervene to save Taiwan if needed, Biden answered that they would.

“We have a commitment to that,” the president claimed, although the United States has never officially made such a commitment. In a later statement clarifying the president’s remarks, the White House claimed that the U.S. policy with regard to Taiwan had not changed.

“The US defense relationship with Taiwan is guided by the Taiwan Relations Act,” a White House spokesman said, referring to the 1979 law outlining Washington’s relations with the island after its diplomatic recognition of Beijing. “We will uphold our commitment under the Act, we will continue to support Taiwan’s self-defense, and we will continue to oppose any unilateral changes to the status quo.”

The “deliberate ambiguity” policy, which the United States. has maintained in various forms since its recognition of China in 1978, is effectively a compromise position that prevents the United States from having to choose between firmly committing to defend Taiwan and firmly rejecting doing so. If such a commitment is made explicit, then Taiwan could gain the political backing to overtly secede from mainland China, harming U.S.-China relations and potentially leading to war. If, on the other hand, the U.S. confirmed that it would not defend Taiwan, it would increase the incentive for China to invade. Strategic ambiguity, and the U.S. declaration that it recognizes the principle of “one China”—although it has never specified which version of China—serves to maintain the status quo and protect U.S. interests in East Asia.

Taiwan has been governed separately from mainland China since 1949 when the ruling Kuomintang lost the Chinese Civil War and fled to the island. Although it functions as a de facto independent country, Beijing has always regarded it as a wayward province and has committed to returning it to the country’s rule—if necessary by force.

Tensions between China and Taiwan, which have seen periods of escalation and de-escalation, have ramped up in recent months, as China celebrated the centennial anniversary of the founding of the ruling Communist Party. President Xi Jinping declared on October 9 that the reunification of China would “definitely be fulfilled” in the near future.

In recent weeks, dozens of Chinese aircraft have conducted overflights of Taiwan’s “Air Defense Identification Zone,” an area outside its airspace over which it claims some legal rights.