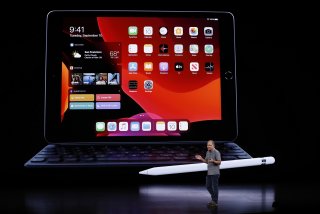 With the 2020 iPad Pro, Apple’s flagship tablet continues its slow metamorphosis into a compelling, but expensive, laptop replacement.

Earlier this year, The National Interest discussed what Apple needs to do to make the 2018 iPad Pro a viable option for a wide swathe of creatives and professionals--we are pleased to confirm that the 2020 refresh has taken many of these steps, and then some.

The internal hardware is highly similar between the 2018 and 2020 models, boasting the same excellent display coupled with a marginally improved A12Z processor and additional camera sensors that are unlikely to make a drastic difference for most people.

Where things get interesting is the new “Magic Keyboard” smart keyboard folio, which transforms the iPad from the touch-based experience of a traditional tablet to a hybrid platform more in line for Microsoft's Surface laptops. The outward design is fairly ingenious; the new folio’s magnetic cantilever system is clever in its implementation, and easily Apple’s best viewing angle adjustment mechanism to date.

The small, tightly placed chiclet keys of the 2018 folio have been replaced by a backlit, full-sized keyboard reminiscent of Apple’s Macbooks, making the iPad Pro a more viable option for prolonged typing sessions. Joining the much-improved keyboard is a full-fledged trackpad, finally bringing Apple’s long-promised dedicated cursor support to iPads. The implementation is still very Apple-esque, with a round and context-dependent cursor that’s unlike anything you’d find on a Windows PC or Chromebook.

The cursor changes shape depending on what it’s hovering over, while the trackpad itself can be used for all the same gesture commands as the touch-screen. Despite Apple’s continued commitment to keep the iPad as a “touch-first” platform, the large list of things that you can now do without ever touching the display makes the iPad feel more like a touch-screen laptop than ever before. The Magic Keyboard is coming in May, and will be compatible with both the 2018 and 2020 iPad Pro models.

Since the 2010 introduction of Apple’s flagship tablet line, every subsequent iPad release has followed a similar story: excellent hardware restricted by limited software. One suggested solution has been to simply run MacOS software on iPad hardware, but Apple has made it clear throughout the years that they have no interest in a MacOS-iPad convergence; as Apple CEO Tim Cook famously put it,  “you can converge a toaster and a refrigerator, but those things are probably not gonna be pleasing to the user.”

The launch of the 2020 iPad Pro coincides with the imminent release of iPadOS 14, which enshrines cursor support and a host of other quality-of-life software changes. iPadOS is here to stay for the foreseeable future, but the 2020 refresh proves that Apple is willing to adapt the iPad platform to give Microsoft some newfound competition in the detachable laptop space. What’s more, the fact that these changes are contained in a separately-sold keyboard allows Apple to pursue a two-tiered strategy similar to Google’s Pixel Slate and the Microsoft Surface line: people who want to use the iPad Pro like a traditional tablet can continue to do so, but professionals and power users can purchase an optional $300 accessory to gain access to additional laptop-like features. While far from cheap, the Magic Keyboard is a crucial design milestone in Apple’s ongoing attempts to fully realize the iPad’s potential as a productivity platform. The iPad Pro is now more of a “computer” than ever before, but the ball is squarely in Apple’s court to determine exactly what kind of computer it wants its iPad line to be.

Image: Greg Joswiak, Apple’s vice president of Product Marketing, speaks in front of an iPad at an Apple event at their headquarters in Cupertino, California, U.S. September 10, 2019. REUTERS/Stephen Lam