April Could Be Coronavirus Hell in the United States 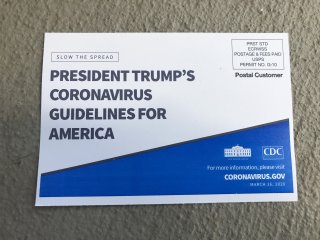 The first positive case of the coronavirus in the United States was confirmed on January 20, 2020. At the beginning this month, that had turned into less than a hundred cases. But over the course of March, these tiny outbreaks have multiplied over a thousand times, reaching the current, growing number of 144,000 cases. And April, as it forebodes on the calendar’s horizon, is predicted to be even worse, with over 20,000 new cases a day.

A majority of the cases are located in New York and New Jersey. New York Governor Andrew Cuomo’s office is predicting that cases will peak in his state in twenty-one days. For that reason, he is desperate to receive new ventilators now, before hospitals become overrun with cases.

Cuomo has requested at least 30,000, a number the Trump administration has been hesitant to give. President Trump has requested that New York use up its stockpile before providing them with more equipment.

And it’s not just New York that is approaching its breaking point. “No state, no metro area will be spared, and the sooner we react and the sooner the states and the metro areas react and ensure that they put in full mitigation, at the same time understanding exactly what their hospitals need, then we’ll be able to move forward together and protect the most Americans,” said Dr. Deborah Birx, the coronavirus response coordinator working under Vice President Mike Pence.

McCormack Place, a giant convention center in Chicago, has been renovated to hold 3,000 hospital beds. Other major urban centers are preparing for the worst.

For most of the month, and for at least next month, Americans have been instructed to practice social distancing. This is intended to halt the spread of the virus and prevent an overwhelming influx to hospitals. While it’s likely a large percentage of Americans will have contracted the coronavirus by the time the pandemic is over, it’s crucial that the growth curve be flattened to prevent flooding the healthcare system.

The death rate in the U.S. stands at over 2,500 people. Morgues in New York City are already reaching capacity, with refrigerator trucks being brought to hospitals to preserve the bodies.

It’s likely April will be filled with images reminiscent of Italy, the European country most hurt by the coronavirus, and which is suffering over 750 dead a day.