Mike Pence Is Going to War Against the Coronavirus 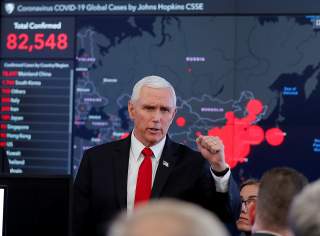 President Donald Trump used his public address last evening to announce that Vice President Mike Pence would be placed in charge of the “Corona Task Force” that had been established in response to the virus outbreak. According to Trump, Pence is “really very expert at the field” and has “got a certain talent for this.” Known for strong party credentials and evangelical Christian beliefs prior to the 2016 election, Pence’s time as the number two at the White House has been as dutiful as it’s been uneventful.

“As a former governor, from the state [Indiana] where the first MERS case emerged in 2014, I know full well the importance of presidential leadership, the importance of administration leadership, and the vital role of partnerships of state and local governments and health authorities in responding to the potential threat of dangerous infectious diseases,” Pence said after being introduced by the president.

In his new position as the “Corona Czar,” Vice President Pence will direct and coordinate emergency resources and response initiatives with the Department of Health and Human Services, the Center for Disease Control and Prevention, the Department of Homeland Security, the Department of Transportation, and the Department of State. He selected Dr. Deborah Birx, who had been previously managing the U.S. campaign against HIV and AIDS, to serve under him.

Pence did not dillydally in asserting himself in his new role. Today he held his first task force conference, where he took questions from the media. He clarified that while he will be leading the effort, it will be chaired by HHS Secretary Alex Azar, whom Pence has known for several years. “The President wanted to make it clear to the American people that we’re going to bring a whole of government approach to this…what a priority this is for him and for his administration,” Pence said.

Even at the annual Conservative Political Action Conference, where Pence also spoke today, addressing the coronavirus outbreak played an important role in his remarks. “I promise you we will continue to bring the full resources of the federal government to bear to protect the American people,” Pence told the Republican crowd. “And as the president also said, it’s important to remember we’re all in this together. This is not the time for partisanship.”

Despite the expressed wishes of the White House, appointing a politically polarizing figure such as Mike Pence has drawn a backlash. “He’s not someone who embraces science and public health evidence,” Jeffrey Levi, a professor of health management and policy at George Washington University told the Financial Times. “The vice-president has a history of rejecting the CDC’s advice.” The primary example provided by critics is that Pence has previously expressed skepticism about the link between smoking and cancer.