Critic Says Trump Is 'Ignorant' and 'Incoherent' On Coronavirus. Others Call It 'Trump' Virus. 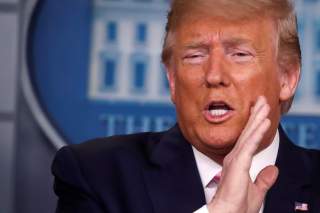 Yesterday evening President Donald Trump addressed the public from the White House to explain what actions the government was taking in response to the coronavirus and offer assurances.

According to Politico, staff members were scrambling in the hours prior to the address trying to get an idea of what the president intended. “But in the end, the news conference was a strategic effort by the White House to dampen fears about the coronavirus — by making Trump the face of it.”

“I have just received another briefing from a great group of talented people on the virus that is going around to various parts of the world,” Trump said, before a defense of his administration’s timetable of actions including restricting flights from infected areas. “Because of all we’ve done, the risk to the American people remains very low. We have the greatest experts really, in the world right here. The people that are called upon by other countries when things like this happen. We are ready to adapt and we’re ready to do whatever we have to as the disease spreads, if it spreads.”

The President said most of the Americans currently infected with coronavirus were improving, and that they were being well taken care of. He contrasted the low (raw) death count with the number of people who die every year from the seasonal flu, while promising that the administration was “rapidly” working on finding a vaccine.

Trump also made an outreach to China, where the virus originated, tens of thousands are infected and thousands have died. “I spoke with President Xi. We had a great talk. He’s working very hard. I have to say, he’s working very, very hard. If you can count on the reports coming out of China, that spread has gone down quite a bit. The infection seems to have gone down over the last two days. As opposed to getting larger, it’s actually gotten smaller.”

Trump concluded his remarks by placing Vice President Mike Pence in charge of overseeing the emergency, which likely includes further negotiations with congress about funding. The administration requested $2.5 billion to respond to the virus, while congressional Democrats believe more should be appropriated (something closer to $8.5 billion).

The address was not well received in all quarters. “Let’s Call It Trump Virus,” was the title given to a New York Times op-ed by Gail Collins, who admonishes the administration for being so unprepared for a global health crisis.

Immediately following the president’s remarks, former Obama health policy advisor and current special advisor to the director-general of the World Health Organization Ezekiel Emmanuel said in an interview that he “found most of what he said a little incoherent.”

"He just revealed how ignorant he is about the situation. We don’t know how similar or dissimilar this is to the flu,” the doctor continued. "We know one thing. It is actually more communicable than the flu. It passes between people very, very easily."