Are 12 Navy Aircraft Carriers Enough to Stop a Rising China? 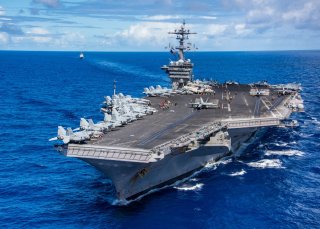 For years, the question of how many aircraft carriers the U.S. Navy needs has been reverberating throughout the Pentagon, Congress, and the White House as the Navy seeks to best meet demands and respond to threats in an increasingly dangerous and fast-changing threat environment.

Nothing in the world can project power like a U.S. Navy aircraft carrier, which brings the ability to launch massive offensive strikes from waters offshore, holding targets and enemies at risk. This proven reality explains why the mere forward presence of a carrier can have a “calming” type of deterrent effect. At times, the Navy and Pentagon’s leaders have called for eleven carriers, and have most recently asked for twelve. However, the U.S. Navy now only operates ten aircraft carriers, so it makes sense that the Navy’s newly released “Chief of Naval Operations Navigation Plan 2022” has called for twelve aircraft carriers as the Navy moves into the future.

“Nuclear-powered aircraft carriers, which will remain the most survivable and versatile airfields in the world, provide long-range, persistent sea control, power projection, and organic sensing in contested seas, as well as flexible options across the spectrum of conflict,” the text of the plan states.

There are many reasons why the service would cite twelve carriers as the optimal number, the first of which is combatant commander demand. Fleet commanders across the world, including in the Mediterranean, Pacific, Persian Gulf, and Baltic Seas, regularly see the need for a forward carrier “presence” given the need to deter potential aggressors or even secure vital strategic international waterways. Certainly, the possibility of a two-front war in various parts of the world at the same time would require carriers for both “presence” and “power projection.”

The largest factor, however, may well pertain to China. While China only operates two carriers at the moment, the pace at which it is adding new ones, and its ambition for continued naval expansion, poses a serious threat to the U.S. Navy. It is evident that the PLA Navy wishes to expand its role beyond regional power projection to distant seas where Beijing seeks to become the dominant global power. The Chinese Navy is already larger than the U.S. Navy in terms of sheer size, and new destroyers, amphibious assault ships, and submarines are being added at a staggering rate.

Finally, there is a reason the U.S. Navy regularly conducts “dual carrier” operations in the Pacific, as newer networking technologies enable great synergies between Carrier Air Wings and expand the ability to launch large-scale air attacks from the ocean. Scale could be crucial in any kind of major confrontation with China, given that large areas of land, coastal regions, and islands would need to be held at risk or attacked in combat.