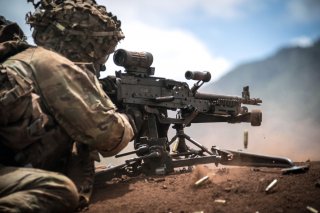 The standard definition of a machine gun is “a weapon which, when the trigger is pressed, will fire and continue to reload and fire so long as the trigger remains pressed and the supply of ammunition is maintained.” That concept is generally understood by those who have never actually fired a machine gun.

However, how it is able to continue to fire is something that most people don’t understand. They may know that the trigger is pulled and the gun keeps firing—but the how is the part they can’t explain. Weapons such as the infamous Gatling Gun relied on a crank that both loaded and fired the round. While technically an “automatic” weapon, these aren’t really different than today's semi-automatic rifles and pistols, where a pull of the trigger is needed to fire each round.

As the late machine gun expert Ian V. Hogg (1929–2002), explained in his book Machine Guns, “Strictly speaking, to be called an ‘automatic’ machine gun, the weapon must develop its own power.”

The concept of “fully automatic” was only perfected by Hiram Maxim, the American-born inventor who developed the first successful machine gun, the Maxim Gun. His weapon was “recoil-operated,” which even today remains one of the standard operating systems of a machine gun.

The original “long-recoil” works in such a way: the firing pin strikes, the cartridge explodes and the recoil begins while the next bullet is pushed into place. The barrel and bolt recoil and are locked together. The bolt is then unlocked and held, while the barrel returns to the battery, and the empty case is extracted and then ejected. A new round is placed in the feedway. The bolt is released, runs forward to the chamber round. The breech is locked and the firing pin strikes the cartridge and the process continues.

In long recoil, the bolt and barrel also recoil the full length of the cartridge.

By contrast, in a short recoil system, the barrel and bolt are locked together for just long enough for the pressure to dissipate, and the barrel only travels a short distance before unlocking the bolt, bolt carrier, or slide.

Long recoil systems are considered very safe, in part because they allow the longest time of any system to let pressure vent from the barrel before unlocking. However, they are also mechanically complex, but also tend to exhibit higher “felt recoil” to the operator.

The empty case is ejected, and the run-out of gas begins. The bolt rests on the piston slide, while the gun is loaded again and the breech closed.

Gas-operated weapons weren’t possible before the development of smokeless powder, as the thick black powder residue would tend to clog or even jam even the sturdiest manually operated firearms after just a few dozen shots. Gas-operated firearms only became widespread in the interwar period, but during the Second World War became the preferred system for most automatic long guns and machine guns. Even today, gas-operated is seen to have advantages over recoil-based systems with most full-sized machine guns.