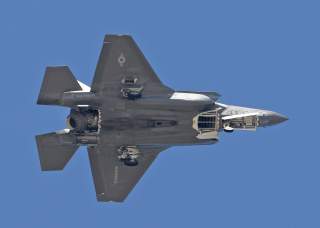 Japan has a plan: convert its anti-submarine helicopter carriers into aircraft carriers that can operate fixed-wing U.S. F-35B fighters.

“The issue is whether Japan really needs this capability,” says Asian security scholar Corey Wallace. “F-35Bs make sense given Japan's far-flung islands with small airfields. But the risk here is turning a powerful ASW [anti-submarine warfare] and amphibious platform, which also has major utility for disaster response, into a training carrier."

At the heart of the question is the Japanese Maritime Self-Defense Force’s “helicopter destroyers,” which actually resemble small, flat top aircraft carriers. The two 13,000-ton ˆ-class and the two 19,000-ton Izumo-class vessels, each equipped with a small squadron of helicopters, are ostensibly intended for anti-submarine and amphibious operations. Not calling them “aircraft carriers” is an important distinction, because Japan’s post-World War II constitution forbids offensive weapons, of which a conventional American-style aircraft carrier might be considered one.

But Japan appears to be crossing the aircraft carrier Rubicon. Japan has announced plans to buy forty-two U.S. F-35B stealth fighters and to convert the helicopter destroyer Izumo to operate them. The F-35B is the short take-off and vertical landing (STOVL) variant of the F-35: they can be launched from an inclined “ski jump” flight deck on a carrier, and then land vertically like a helicopter. This allows small carriers with short decks to operate STOVL aircraft, like the F-35B, where long decks and catapults are needed for conventional aircraft like the F-18E/F Super Hornet.

Warships, like any mechanical design, involve trade-offs. The question is what Japan is giving up to gain a modest carrier capability. “The Hyuga-class carriers can carry up to some 20 F-35B fighters,” Narushige Michishita, a security expert at the National Graduate Institute for Policy Studies in Tokyo, told the National Interest.

“However, the Hyuga-class carriers do not have a ski-jump deck, let alone catapult, seriously limiting the F-35B’s operational radius. More important, if you put too many F-35Bs on a Hyuga, it will undermine its anti-submarine warfare capability, which is the most important mission of the ship. I would, therefore, say that the most important objective of putting F-35Bs on Hyuga is to improve its air defense capability so that it can conduct anti-submarine warfare operations in the hostile environment.”

Asian security expert Ben Rimland says Japanese carriers reflect a change in policy regarding Japanese islands that are claimed by China. “Purchasing V/STOL aircraft, and their likely stationing aboard modified Izumo-class helicopter carriers means that Japan is committed to a policy of base dispersal in the Ryukyu island chain,” Rimland told the National Interest. “This will likely feature ad-hoc airfields on smaller islands, in addition to the new aircraft carriers, serving to create multiple vectors of attack. This will undoubtedly complicate the jobs of Chinese planners.”

Rimland says it isn’t yet clear whether the F-35Bs will be operated by the Japanese Navy or by the Air Force. If it’s the air force, this will be another example of the Ministry of Defense pushing for the military services to learn to operate jointly. “I would expect that this pushes the ASDF and MSDF to adopt common tactical data links like cooperative engagement capability to create a common operational picture,” Rimland adds. “The ASDF would also be expected to protect MSDF vessels, assuming that at least a few F-35Bs would be dedicated to a CAP [combat air patrol] around the carrier.”

Because the Izumos are not real carriers, Rimland also expects the Izumos will serve as training vessels to practice carrier operations. He likens them to the Liaoning, the old ex-Soviet carrier acquired by China as its first carrier, a precursor to more capable Chinese-built carriers.

In 2021, A Big Change is Coming to Navy Aircraft Carriers (And It Makes F-35's Even Deadlier)