Are Turkey and Syria Close to Starting a War? 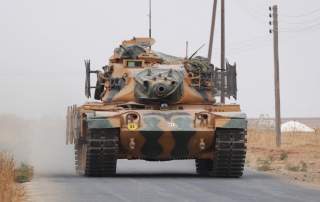 On February 11, a Syrian Air Force Mi-17 helicopter transport helicopter was flying high on a bombing three miles south of Idlib city when team operating man-portable air defense system opened fire. The missile arced upward into the overcast sky and struck the helicopter, which erupted in flames and spun down to the Earth before disintegrating entirely as you can see in this video.

Another video depicts the missile launch from the ground. Amongst the rebel fighters observing the attack can be seen a soldier wearing a helmet and body armor of a Turkish Land Forces soldier.

It’s not clear whether the missile that downed the Mi-17 was a Syria-sourced Strela or Igla missile, or a Stinger missile of Turkish origin. But the shoot down was perceived as merely the most dramatic Turkish retaliation in a series of escalating, deadly clashes as Turkish ground forces attempt to block the Syrian government from wiping out the last major rebel stronghold in Syria’s Idlib province.

The government advance into Idlib has already displaced over eight hundred thousand refugees to makeshift shelters, where children are reportedly dying from exposure to freezing weather.

Over the last eight years, Ankara has been both sympathetic to anti-Assad rebels and displeased by the influx of refugees produced by Syria’s long and bloody civil war. In 2018, it struck a ceasefire deal with Moscow and Damascus in which rebels were accorded a de facto “safe zone” in Idlib province, to be monitored with over a dozen observation posts established by the Turkish military.

During that time, Turkey’s relations with Russia warmed considerably even though it was obvious that Damascus and Moscow would move to crush the rebels in Idlib once they had mopped up resistance in other parts of Syria.

After a relative lull in fighting in 2018, the inevitable offensive began in 2019. Assad’s backers argue the rebels are terrorists unprotected by a ceasefire, as the largest rebel groups, Hayat-Tahrir-al-Sham (HTS, or “Levant Liberaiton Committee”) was formed from a merger of the Al Qaeda al-Nusra group in Syria and several less radical factions.

Turkey had already begun arming the rebels with anti-tank guided missiles—sophisticated weapons which can be used to ambush armored vehicles from miles away. Back in 2013, the United States began supplying TOW missiles to Syrian rebels which resulted in the destruction of hundreds of tanks and armored vehicles. But after the United States cut of support, rebel ATGM attacks petered off until the Turkish resupply.

Jakub Janovsky, who has maintained a video archive documenting the Syrian Civil War for years, posted statistics showing visually confirmed ATGM attacks surged from a low of sixty-three in 2018 to 162 in 2019—and already fifty-three in just the first five weeks of 2020.

Finally, the Syrian Arab Army captured Maarat al-Numan in January 2020, allowing government forces to advance up the M5 highway towards the rebel-held city of Saraqeb.

An earlier article describes a series of clashes that followed on February 3 as Syrian artillery killed eight Turkish military and civilian support personnel, resulting in heavy retaliatory strikes by the Turkish artillery that killed at least thirteen Syrian government soldiers.

Turkey’s president Recep Erdogan then threatened that Turkey would forcibly expel Syrian government forces that had advanced beyond the line demarcated by the observation posts if they didn’t withdraw by the end of February.

On February 6 Saraqeb fell to the Syrian government, meaning that a direct supply line along M5 between Damascus and government-held Aleppo is close to being established if it hasn’t already.

Since then, reports indicate the Turkish Army has moved more aggressively to shield the rebels and effectively create a narrow corridor in which rebel forces are under protection. That movement appears to include hundreds of armored vehicles entering Idlib province. A map posted by the analysis website T-Intelligence depicts an apparent ‘security belt’ of Turkish fortifications in Taftanaz (established Feb. 6), Idlib City (Feb.7) and al-Mastumah (Feb. 8).

In response, the Turkish Army launched a new round of retaliatory strikes which Ankara claims struck 115 Syrian positions and “neutralized” one hundred Syrian personnel, three tanks, a helicopter and two artillery systems, though these losses haven’t been confirmed. A video shows a Turkish T-122 Sakarya multiple rocket-launcher system (MRLS) with twenty launch tubes unloading a sustained salvo at Syrian government forces in Saraqeb.

The question looms: how far is Turkey willing to go to support the Idlib rebels? And to what extent will that possibility deter Damascus from consolidating its victory?

While Turkish artillery has ample deadly firepower to support rebel forces and retaliate against attacks, halting the momentum of Assad’s forces would likely require direct intervention of infantry and armor that can actually defend ground.

Turkey appears to have massed such forces in the theater and could likely prevail in the short term confrontation. But defending Idlib indefinitely would surely be a quagmire with continual losses of troops and equipment. That’s already true of other territories Turkey has occupied in Syria in its campaign against Syrian Kurdish fighters. For example, on February 10 a suicide bombing in the Turkish-occupied zone, for example, a car bomb in Afrina (a formerly Kurdish-held town occupied by Turkish-backed fighters) killing four.

Furthermore, Russian air defenses may prevent the Turkish military from calling on air support. While Turkey claimed F-16s jets were involved in the first series of retaliatory strikes earlier in February, evidence has yet to emerge of their involvement.

Turkey’s current actions in Idlib are occurring without support from NATO or the U.S. anti-ISIS coalition, though Washington has thrown its rhetorical approval behind Ankara. Simultaneously, Ankara and Moscow have exchanged accusations amidst attempts to negotiate a resolution to the current fighting. However, Moscow might feel comfortable ins calling Turkey’s bluff and not exerting much pressure on Syria to ramp down its offensive in Idlib province (and its attendant humanitarian catastrophe) as Turkey remains committed to purchasing S-400 air defense systems from Russia.

For now, Turkish and Syrian ground forces appear bound on a collision course, though what endgame Ankara sees in the conflict remains unclear.