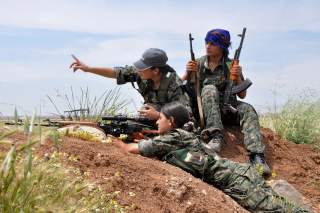 The Trump administration announced on October 6 that it was withdrawing several dozen U.S. special forces operators in northern Syria who had been sent there to shield local Kurdish forces from Turkish attack.  Within hours, Turkey—which has long battled Kurdish PKK insurgents on its own soil—began ground and air attacks on the Syrian Kurdish YPG/SDF faction, killing dozens.

The event was merely the latest in a long history of Western betrayals of Kurdish allies, as detailed in a companion article.

Later, in justifying the move, President Donald Trump noted that the Kurds “didn’t help us in Normandy.”  But he needed not have looked to a battle seventy-five years in the past for evidence of Kurdish helpfulness.  After all, Kurds had basically been serving as the Pentagon’s foot troops in the war against ISIS since 2015.

While U.S. warplanes and rocket artillery did their killing from a safe distance, it was the Kurds—accompanied by small numbers of western special forces operators—that did the close-quarter fighting and dying.

Revolution in Syria and Opportunity for the Kurds

In 2011, a civil war broke out in Syria after peaceful protests were bloodily crushed by the regime of Pres. Bashar al-Assad.  As Assad’s control of Syria contracted, a Kurdish militant group called the YPG (“Peoples Protection Units”) seized most of northeastern Syria under the umbrella of a broader Kurdish/Arab/Minority alliance called the Syrian Democratic Forces.

This marked the formation of a de-facto Kurdish state in Syria called Rojava under the Kurdish PYD political party. The Kurds were well-enough entrenched that the Assad regime only sporadically battled them, preoccupied by more existential threats arising from Arab-led rebel groups.

However, defeated elements of Al Qaeda-in-Iraq reestablished themselves in Syria, eventually morphing into the even more brutal ISIS, which nurtured a genocidal hatred of ethnic and religious minorities.

As ISIS grew in power, its forces assaulted Kurdish and minority communities in Syria and Iraq, infamously murdering thousands of male civilians and consigning minority women and children to sexual slavery.

Finally, in September 2014, ISIS forces laid siege to the Kurdish Syrian town of Kobani, which lay on the Turkish border. Between one and two thousand Kurdish fighters held the town against several times their number of ISIS fighters.

Turkish tanks along the border overlooking the fighting did nothing to intervene. ISIS might be extremist monsters, but the Turkish antipathy towards Kurdish separatists apparently ran deeper.  But after some hesitation, the Obama administration fully committed U.S. airpower against the ISIS attack—ultimately bleeding out the ISIS forces.

This marked a turning point in the anti-ISIS war. U.S. special forces commandos arrived on the ground in Syria to help train and lead SDF fighters against ISIS, furnishing them with heavy weapons as well. Meanwhile, Iraqi Kurds sheltered persecuted Yazidi refugees, and took back the gigantic Mosul dam from ISIS, saving northern Iraq from potentially apocalyptic flooding.

The Kurds became the Pentagon’s ground-troops-by proxy in, particularly in Syria.  Western warplanes would bomb ISIS-held communities, then YPG/SDF forces would advance until they drew heavy fire.  Then Western operators accompanying the Kurds would call down air attacks targeting the revealed ISIS positions.

This was an arrangement that placed the most danger on the Kurds. Up to 11,000 Kurds reportedly died during the conflict.

But over years of bloody fighting, ISIS lost all but a few tiny shreds of its once-sprawling territory.  While Iraqi army troops led the offensive against Mosul, it was Kurdish troops that finally seized the ISIS ‘capital’ of Raqqa, Syria in 2017, and then seized the last major ISIS redoubt.

And its Kurdish forces that today continue to stand guard over prison camps containing thousands of ISIS fighters and their civilian supporters, whom no country appears willing to take back, whether into custody or reintegration into civilian life.

Turkey and the PKK

But Ankara’s hackles were raised by the consolidation of a Kurdish state on its border with Syria.  In the Turkish view, the YPG was merely a Syrian branch of its domestic PKK insurgency, offering the latter a safe foreign base.

The Turks argue that the PKK has at times committed terrorist attacks and is recognized as a terrorist organization by the United States, which is also a NATO ally. Thus, Turkey has fought the Kurds for decades using imported or license-built U.S. F-4 Phantom and F-16 jets, M113 armored personnel carriers and M-60 Patton tanks.

But Ankara has also repeatedly quashed non-violent Kurdish activism. Kurdish politicians elected to the Turkish parliament were jailed for speaking their own language.  In 2013, three Kurdish women were murdered in a political office in Paris not far from where I lived—an attack later discovered to have been instigated by Turkish intelligence.

That same year, Turkey began a peace process with the PKK. But in 2015, a month after a pro-Kurdish party made electoral gains, Turkish Pres. Erdogan used ISIS terrorist attacks targeting the Kurds as a pretext to declare new security measures that killed the peace process.

The operation concluded in 2017 having seized a sector to the west of the Euphrates River.  The United States had warned that it would position American troops to block Turkish attacks east of the Euphrates and at the SDF-held city of Manbij.

As ISIS forces were driven out of Iraq, Baghdad launched a surprise offensive against Kurdish troops in Kirkuk in October 2017, which was seized by the KDP early in the ant-ISIS war.  In a few days, Iraqi army forces took 40 percent of Iraqi Kurdish-controlled territory, including the lucrative oil fields it depended upon for funding.

Washington’s latest betrayal of the Kurds highlights a glaring fact—we still live in a Westphalian international order defined by nation-states.  Nations that achieve statehood—even with populations smaller than your average city—are accorded numerous rights and protections by international organizations and diplomatic halls of power.

But nations without statehood—even a nation with a population of up to thirty-five million—are left to the whims of states.  Every time Washington has had to choose between supporting the Kurds or a nominally allied state, it has chosen the latter.

Yet even given that reality that Washington was bound to disappoint the Syrian’s Kurds aspirations for diplomatic recognition, the White House’s overt green-lighting of Turkish attacks constitutes a particularly unnecessary and self-destructive move, sacrificing a relatively dependable ally in favor of a country with which the United States has been on bad terms for several years due to increasingly thuggish conduct.

It should give any future groups who seek Washington’s support to doubt the credibility of Washington’s commitments.

Worst of all, the Turkish offensive threatens to reverse the progress made in the war against ISIS, which has launched a new wave of terrorist bombings.  The SDF will not be inclined to focus on ISIS when it faces an existential threat from Turkey, and may relax its vigilance over its prison camps full of radicalized ISIS fighters and civilians.

There’s often a reflex to rationalize heartless decisions as being cool-headed calculations of national interest.  But sometimes they are simply as ill-conceived as they are cruel.