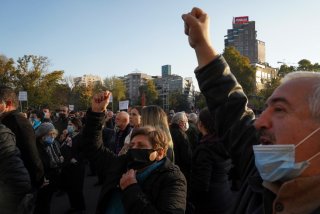 Editor’s Note: The National Interest, as part of its efforts to promote debate, welcomes letters from its readers. Below is a response to a recent essay that appeared on our website:

The Trump administration is an accomplice to the crime. It was derelict in its diplomatic responsibilities as a member of the Minsk Group, the UN-designated instrument for diplomacy in the South Caucasus. Since 1994, the Minsk Group, which is co-chaired by the United States, France, and Russia, managed the conflict but failed to resolve it.

The recent agreement authorizes Russian “peacekeepers”—a misnomer. The agreement allows Russia to consolidate its power in the near abroad, the former territories of the Soviet Union. It also enables Turkey to assert its neo-Ottoman ambitions by allowing Turkish troops to open the Lachin corridor through Armenia to Azerbaijan.

The agreement is flawed in many respects. It is silent on removing 2,000 jihadis deployed to Nagorno-Karabakh by Turkey since the outbreak of hostilities on September 27. If they are allowed to remain in Nagorno-Karabakh, jihadis are likely to commit further atrocities against Christian Armenians. Violence may be momentarily deterred, but it will resume when international attention is diverted to the next global crisis.

America’s surrender to nefarious strongmen like Vladimir Putin and Recep Tayyip Erdogan is part of a pattern. Did the United States acquiesce to their “peace plan”, or was Donald Trump simply asleep at the switch as he sought to delegitimize Joe Biden’s election victory? Either way, Armenians in Nagorno-Karabakh will pay a heavy price.

David L. Phillips is director of Columbia University’s Program on Peacebuilding and Human Rights. He is a former chairman of the Turkey-Armenian Reconciliation Commission.