The Problem with the Nagorno-Karabakh Ceasefire Agreement 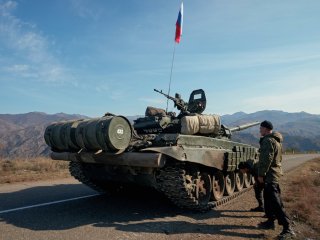 Armenian prime minister Nikol Pashinyan took to Facebook late last evening to announce that he had accepted a Russia and Turkey-backed ceasefire ending the forty-five-day war with Azerbaijan. Outraged Armenians poured into the streets of Yerevan. Some broke into the parliament building; others beat unconscious Speaker of Parliament Ararat Mirzoyan in front of his wife and children. Crowds are demanding the resignation of Pashinyan, who came to power in a 2018 democratic revolution.

The popular anger is understandable. For Armenia, the agreement is a disaster:  It lost much of southern Nagorno-Karabakh and key strategic districts surrounding the disputed territory. Refugees fleeing the cultural capital of Shusha will likely not be allowed to return. Ilham Aliyev, the authoritarian dictator in Azerbaijan which pursued the war with Israeli drones, Syrian mercenaries, Turkish F-16s, and his own special forces, is gloating. The Azeri president further noted that there is no guarantee that Nagorno-Karabakh’s autonomous government will continue to exist.

The deal, reportedly negotiated by Russian president Vladimir Putin and Turkish president Recep Tayyip Erdoğan, not only calls for the deployment of Russian and Turkish troops along the lines of control, but it also guarantees a transportation route through Armenian territory between Azerbaijan proper and its Nakhichevan enclave, a clause which Aliyev said was added at his insistence.

Both of these facts are deeply problematic and should be questioned by the U.S. State Department. To station German troops in Israel, Japanese troops in Korea, or Italian troops in Libya would be historically tone-deaf. To allow Turkish troops into Armenia or Armenian-populated districts of Nagorno-Karabakh is worse because the Turkish government continues to deny Armenia’s genocide and because Erdoğan and many elements within his government continue to speak in terms of religious warfare. Erdoğan called Turkish forces invading Kurdish populated areas in northern Syria “the army of Muhammad,” and Yeni Akit, an Islamist paper popular with Erdoğan, announced, “Go tell the infidels, Mohammed’s army has returned.” Simply put, there is simply no reason for Turkey to have any role in the conflict. To allow it to have a role rewards Turkish aggression, affirms Erdoğan’s pan-Turkic delusions, and encourages Erdoğan to further challenge Turkey’s century-old borders.

Azerbaijan’s offensive is also a slap in the face of the Minsk process which had sought to negotiate an end to the Nagorno-Karabakh conflict since shortly after the fall of the Soviet Union. That Russia essentially cut the United States out of its separate agreement underscores the folly of relying on multilateral groupings and is a victory for Russia that does not escape any potential U.S. allies in the region. That United States has appeared to acquiesce to the agreement which empowers Russia and undermines a nascent democracy underscores the State Department’s humiliation and strategic confusion.

The real challenge of the ceasefire agreement is to Congress. It is just over seven months since Deputy Secretary of State Stephen E. Biegun waived provisions of Section 907 of the Freedom Support Act banning the provision of arms to Azerbaijan with the finding that the weaponry “Will not undermine or hamper ongoing efforts to negotiate a peaceful settlement between Armenia and Azerbaijan or be used for offensive purposes against Armenia.” Either Biegun lied or, more likely, the U.S. Embassy in Baku was asleep at the switch and had no idea what Aliyev was planning. The intelligence failure should have consequences, though: the immediate end to a waiver and reimposition of sanctions on Azerbaijan.

In the short-term, Azerbaijan might celebrate and Armenia lick its wounds. No one in Washington should confuse quiet with peace. By showing its participation in the Minsk process to be bad faith and by effectively engaging in just one more round of ethnic cleansing, Azerbaijan is setting the stage for a new chapter in the conflict. It may not come within a month or within a decade, but both Turkey and Azerbaijan will likely suffer political vacuums when Erdoğan or Aliyev dies. At the same time, their efforts to humiliate Armenia will simply fuel more populist governments there which will await an opportunity for revenge. This is not the end of the Nagorno-Karabakh conflict; it is just the beginning of a new chapter.