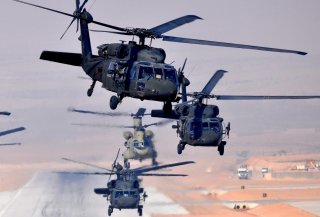 Referred to by the service as Air-Launched Effects, the mini drones are intended to operate in a range of different capacities to include of course Intelligence, Surveillance, and Reconnaissance as well as counter-drone intercept or even operating themselves as mini-drone explosive weapons in an attack mission.

The ALE program is broken up into distinct phases which rely upon cutting-edge and upgradeable mission computing, sensors, kinetic and non-kinetic effectors, and transport-layer networking technologies.

Last year, the U.S Army awarded ten Air-Launched Effects Projects totaling $29.75 million, a service report said. The ten projects are categorized into three Air-Launched Effects lines of effort: air vehicle, mission systems, and payloads. Awards for the ALE air vehicle were awarded to Alliant Techsystems Operations, Raytheon Company, and Area-I Inc. Each of these vendors is developing options intended to meet or exceed the Army’s requirements for speed, weight, power, and range, among other things.

Raytheon is offering an adaptation of its well-known Coyote Block 3 mini-drone. Coyote Block 3, a newer variant of the now operational Coyote Blocks 1 & 2, can leverage a variety of payloads to include non-kinetic interceptor technology to destroy enemy drone swarms or disable approaching threats.

“We have a mature, low risk solution. We leveraged our Coyote Block 3 and we will do a ground launch to demonstrate connectivity to an air vehicle and communicate through an unmanned network,” Abel Ghanooni, senior director for Short Range Air Defense and Rapid Development Programs for Raytheon Missiles & Defense, told The National Interest in an interview.

Interestingly, Raytheon’s Block 3 was put on contract by the U.S. Navy earlier this year to launch from unmanned surface and undersea vessels on reconnaissance missions. In a demonstration in February of this year, Coyote Block 3 used non-kinetic technology to destroy an enemy swarm of ten drones. Non-kinetic effectors could incorporate High Powered Microwave technology, electronic warfare systems, or other kinds of jamming able to disable an approaching threat while minimizing collateral damage and avoiding an explosion. Along with providing the ALE air vehicle itself, Raytheon is also competing with a handful of industry bidders regarding potential “payloads” or sensor configurations for the ALE. Much of this, Ghanooni explained, relies upon upgradable and fast-evolving mission computing.

For the Army, Raytheon plans to deliver an air-launched mini-drone ALE intended to open up new mission possibilities. The emerging technology will be demonstrated in Oct. 2021 at Dugway Proving Grounds, Utah, as part of an overall developmental effort.

“ISR is one piece of that mission. The demo we are working on is to meet the air vehicle requirements and draw from our ability to be modular and integrate new upgrades. Our goal is to be able to go at long ranges with the ability to be expendable,” Ghanooni said.