These are the Transport Vehicles That Will Change the Navy 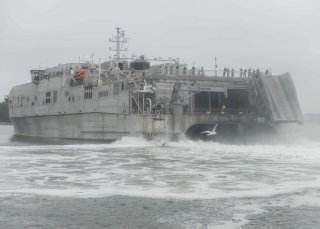 The Navy’s fleet of Expeditionary Fast Transport vessels continues to massively expand its mission scope. The fleet is increasingly in demand by combatant commanders, partly because it can perform high-speed transit for Marines, soldiers and special operations forces. Also, the fleet can transport six hundred tons of cargo, supplies and weapons in support of combat missions. As a result, the EPFs are being used with great success in humanitarian and medical support missions.

EPFs are already providing critical support to earthquake victims in Haiti and can also enhance the Navy’s medical mission scope in the event that the USNS Mercy and USNS Comfort hospital ships are already engaged in missions or can’t arrive fast enough. Why not further expand the Navy’s medical assistance capabilities with more EPFs?

While the congressional markups and committee budget procedure has yet to fully unfold, the Navy’s 2021 budget request did not include funding for any additional EPFs, potentially letting a highly efficient production line diminish capacity. This could change as service leaders further examine the ship’s growing mission scope and operational value.

Austal USA is currently under contract to build fifteen EPFs for the Navy, twelve of which have been delivered so far. Given the rapid expansion in its mission set and multimission functionality, why isn’t the Navy buying more of these ships? An interesting question explored by Capt. Robert Locker Jr. in a 2021 white paper on the EPF simply titled Expeditionary Fast Transport Ship.

Locker makes a number of significant points, pointing out that the EPF is performing a number of the island-hopping, fast-transport amphibious missions designed for the now-emerging Light Amphibious Warship (LAW).

“Marines are hopeful to receive the first LAW by 2026, whereas the EPF can currently provide company-level ship-to-shore connectors until the LAWs can matriculate into the fleet,” according to Locker.

Locker further explored the issue to suggest that an EPF might not only function as a short-term bridge to the LAW but also as a longer-term supplement, given the expected increase in demand for amphibious, high-speed, multi-domain, ship-to-shore littoral missions. Locker suggested that building additional ships may actually lower costs as well as improve Marine Corps operations.

“If the Marine Corps wanted more EPFs to bridge capabilities, then the vessel would be cheaper to produce than $180 million,” according to Locker. “Economies of scale were not initially in favor of the EPF: only fourteen vessels were expected to be produced and only twelve were actually constructed. More EPF production would be expected to lower cost.”

It is not difficult to envision the range of ways the EPF might further fortify combat missions and even make some otherwise not possible operations successful.

When it comes to warfare, the ships can on-load and off-load fully combat-loaded Abrams main battle tanks, a circumstance which multiplies amphibious attack options from ship-to-shore. While the EPFs are not intended to function as fully-armed combat vehicles, they are quite capable of supporting combat operations in a variety of key respects.

“The EPF is designed to transport 600 short tons of military cargo 1,200 nautical miles at an average speed of 35 knots in Sea State 3,” Locker stated in his white paper. “The ships are capable of operating in shallow-draft ports and waterways, interfacing with roll-on/roll-off discharge facilities and on/off-loading a combat-loaded Abrams Main Battle Tank (M1A2).”