The Army Has Big Plans for a Light, Fast and Deadly Super Tank. Here's What We Know So Far. 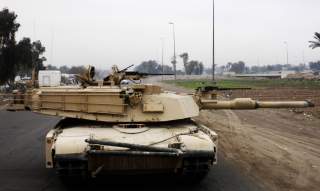 Could there be a lightweight armored attack vehicle able to speed across bridges, deploy quickly from the air, detect enemies at very long ranges, control nearby robots and fire the most advanced weapons in the world - all while maintaining the unprecedented protection and survivability of an Abrams tank?

Such questions form the principle basis of rigorous Army analysis and exploration of just what, exactly, a future tank should look like? The question is fast taking-on increased urgency as potential adversaries continue to present very serious, technologically advanced weapons and attack platforms.

“I believe that a complete replacement of the Abrams would not make sense, unless we had a breakthrough...with much lighter armor which allows us to re-architect the vehicle,” Col. Jim Schirmer, Program Manager for the Next Generation Combat Vehicle, told reporters at the Association of the United States Army Annual Symposium.

There are currently a range of possibilities being analyzed by the Army, most of which hang in the balance of just how quickly certain technologies can mature.

While many Army weapons developers often acknowledge that their are limitations to just how much a 1980s-era Abrams tank can be upgraded, the platform has made quantum leaps in technological sophistication and combat technology.

“Until technology matures we are going to mature the Abrams platform,” Schirmer said. We would need an APS that could defeat long-rod penetrators.(kinetic energy armor penetrating weapons) -- that might enable us to go lighter,” Schirmer said.

A 2014 essay from the Institute for Defense Analysis called "M1 Abrams, Today and Tomorrow," reinforces Schirmer's point by detailing the rapid evolution of advanced armor-piercing anti-tank weapons. The research points out that, for instance, hybrid forces such as Hezbollah had some success against Israeli Merkava tanks in 2006.

Therefore, GD and Army developers continue to upgrade the Abrams and pursue innovations which will enable the Abrams to address these kinds of evolving threats - such as the long-range kinetic energy penetrator rods Schirmer mentioned; one of the key areas of emphasis for this would be to develop a more expansive Active Protection System able to knock out a much wider range of attack possibilities - beyond RPGs and certain Anti-Tank Guided Missiles.

The essay goes on to emphasize that the armored main battle tank bring unparalleled advantages to combat, in part by bringing powerful land-attack options in threat environments where advanced air defenses might make it difficult for air assets to operate.

Using computer algorithms, fire control technology, sensors and an interceptor of some kind, Active Protection Systems are engineered to detect, track and destroy incoming enemy fire in a matter of milliseconds. Many Abrams tanks are already equipped with a system known as “Trophy” which tracks and knocks out incoming enemy fire.

A next-gen APS technology that can take out the most sophisticated enemy threats could enable the Army to engineer a much lighter weight tank, while still maintaining the requisite protection.

For these and other reasons, the combat-tested Abrams weapons, armor and attack technology will be extremely difficult to replicate or match in a new platform. Furthermore, the current Abrams is almost an entirely new platform these days - in light of how much it has been upgraded to address modern combat challenges.

In short, regardless which future path is arrived upon by the Army - the Abrams is not going anywhere for many years to come. In fact, the Army and General Dynamics Land Systems have already engineered and delivered a new, massively improved, M1A2 SEP v3 Abrams. Concurrently, service and industry developers are progressing with an even more advanced v4 model - featuring a massive “lethality upgrade.”

All this being the case, when it comes to a future tank platform -- all options are still on the table.

“Abrams will be out there for some time. We are funded from the v3 through the v4, but there is a thought in mind that we may need to shift gears,” David Marck, Program manager for the Main Battle Tank, told a small group of reporters at the Association of the United States Army Annual Symposium. “I have no requirements for a replacement tank.”

Accordingly, some of the details, technologies and applications intended for the v4, are still in flux.

“The Army has some decisions to make. Will the v4 be an improved v3 with 3rd-Gen FLIR, or will the Army remove the turret and build in an autoloader - reduce the crew size?” Michael Peck, Enterprise Business Development, GDLS, told Warrior Maven in an interview.

Also, ongoing work on NGCV could, to a large extent, be integrated with Abrams v4 exploration, Peck explained. GD is preparing options to present to the Army for input - such as options using a common lighter-weight chassis with interchangeable elements such as different turrets or an auto-loader, depending upon the threat.

“There are some things that we think we would do to make the current chassis lighter more nimble when it comes to crew size and electronics - eventually it may go on a 55-ton platform. We have a couple different interchangeable turrets, which we could swap as needed,” Peck asked.

Despite the speed, mobility and transportable power challenges known to encumber the current Abrams, the vehicle continues to be impactful in combat circumstances - and developers have sought to retain the technical sophistication designed to outmatch or counter adversaries.

“Today’s tank is so different than the tanks that took Baghdad. They were not digitized, did not have 1st-Gen FLIR and did not have commander’s independent viewers,” Marck said.

The massive acceleration of the Army future armored platform - the Next Generation Combat Vehicle - is also informing the fast-moving calculus regarding future tank possibilities.

Maj. Gen. Brian Cummings, Program Executive Officer for Ground Combat, told Warrior Maven in an interview the Army developers are working on both near-term and longer term plans; he said it was entirely possible that a future tank or tank-like combat vehicle could emerge out of the NGCV program.

“We want to get as much capability as quickly as we can, to stay above parity with our adversaries,” Cummings said.

The program, which has now been moved forward by nearly a decade, could likely evolve into a family of vehicles and will definitely have unmanned technology.

“Right now we are trying to get the replacement for the Bradley to be the first optionally manned fighting vehicle. As we get that capability we may look at technology that we are getting in the future and insert them into current platforms,” Cummings said.

Any new tank will be specifically engineered with additional space for automotive systems, people and ammunition. Also, as computer algorithms rapidly advance to allow for greater levels of autonomy, the Abrams tank will be able to control

However, while clearly emphasizing the importance of unmanned technology, Schirmer did say there was still room for growth and technological advanced necessary to replicate or come close to many human functions.

“It is not impossible - but it is a long way away,” Schirmer said.

The most advanced algorithms enabling autonomy are, certain in the nearer term, are likely to succeed in performing procedural functions able to ease the “cognitive burden” of manned crews who would then be freed up to focus on more pressing combat-oriented task. Essentially, the ability of human cognition to make dynamic decisions amid fast-changing variable, and make more subjective determinations less calculable by computer technology. Nonetheless, autonomy, particularly when enabled by AI, can condense and organize combat-essential data such as sensor information, targeting technology or certain crucial maintenance functions.

“Typically a vehicle commander is still looking through multiple soda straw. If no one has their screen turned to that view, that information is not of use to the crew, AI can process all those streams of ones and zeroes and bring the crews’ attention to threats they may not otherwise see,” Schirmer said.

“The Army's ultimate intent is to upgrade the entire fleet of M1A2 vehicles -- at this time, over 1,500 tanks,” an Army official told Warrior.