The Army Is Looking to Employ Sensors on High Flying Balloons 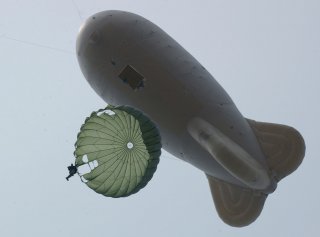 During the American Civil War, the Union Army established the Balloon Corps, which was initially organized as a civilian operation that employed a group of prominent American “aeronauts.” The unit, which was active from 1861 to 1863, used seven specially built, gas-filled balloons to perform aerial reconnaissance on the movements of the Confederate States Army.

The unit was disbanded before the war ended, but in 1893, the United States Army Signal Corps established a War Balloon Company at Fort Riley, Kansas. Throughout the early 20th century, the U.S. Army and U.S. Navy continued to experiment with lighter-than-air blimps and dirigibles to help provide reconnaissance. During World War II, the Navy’s airships were even employed in anti-submarine warfare (ASW) operations in the Mediterranean Theater of Operations.

Now the U.S. Army could be again employing high-flying balloons, but with twenty-first-century technology that could include sensors to facilitate target jamming.

The systems, dubbed High-Altitude Extended-Range Long Endurance Intelligence Observation System, or HELEIOS, would be equipped with cyber and electronic warfare sensors. It could fly above enemy territory to provide data while also potentially jam or disrupt an adversary’s communications, according to the Army Times.

HELEIOS is part of the Multidomain Sensing System (MDSS) family, which is a series of high-altitude systems that could help the Army cover the vast distances over which it may have to operate during a future conflict. As the aeronauts of the Union Army Balloon Corps were able to monitor the troop movements of Confederate forces, HELEIOS could provide real-time data, but from extreme distances.

In addition to being fitted to a balloon, HELIOS could be mounted on a solar glide vehicle and operate at sixty thousand feet (18.2 kilometers) or higher, making it hard, if not impossible, for an enemy force to detect, explained Col. Daniel Holland, Army capability manager for electronic warfare, during an August 17 presentation at the TechNet Augusta conference.

“The idea is blanketing the deep area with low-cost attritable sensors to enable deep sensing and deep effects,” Holland said. “Essentially our question is can we get the payload light enough to fly on this penetrating, high-altitude, attributable platform, get close enough to place our effects on target, likely with a special purpose electronic attack or RF-enabled cyber.”

The Army has announced that it would test HELEIOS through Project Convergence, a series of exercises that are slated to take place this fall at the Yuma Proving Ground in Arizona. Project Convergence is the Army’s contribution to the military-wide Joint All Domain Command and Control, or JADC2, concept, where data will link together land, air, sea, cyber and space capabilities.

The Army has already awarded other transaction agreements to Raytheon Technologies and L3Harris Technologies in June to develop sensor prototypes for the first phase of the MDSS program, and HELEIOS will serve as one component of that MDSS suite.