Army Revs Up Missiles and Laser Weapons for Stryker 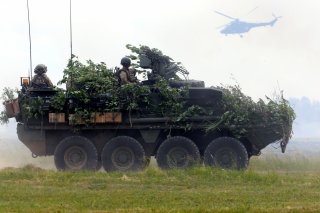 The Army Stryker is firing Hellfire missiles, fifty-kilowatt lasers and Stinger missiles to ensure maneuvering infantry in fast-advancing armored units are sufficiently protected from lethal enemy threats such as drones, helicopters and some fixed-wing aircraft.

It is all part of the Army’s ambitious and fast-moving Maneuver Short Range Air Defense (M-SHORAD) program intended to bring crucially needed air-defense technology to forces on the move in combat.

Daryl Youngman, deputy director of the Army’s air and missile defense cross-functional team for Army Futures Command, told the National Interest that the SHORAD program is progressing well in alignment with three designated increments, each successively expanding functionality. The first increment, now already operational, is arming the Stryker with guns, missiles and onboard sensors so that it can quickly find, track and shoot to kill enemy targets in the air. As part of this first phase, the Stryker is already armed with Hellfire and Stinger missiles.

The second increment involves arming the Stryker with high-powered laser technology to offer Stryker crews additional offensive and defensive weapons capability. The Stryker already has fired five-kilowatt lasers on multiple occasions and is now being engineered to fire a fifty-kilowatt laser, something which represents a breakthrough in mobile power generation and sustainment. Lasers are low-cost per shot, yet they also bring the possibility of unparalleled precision and less explosive destruction options. Should an approaching enemy drone in route to attack over an urban area be discovered, a laser weapon might be preferred because incinerating or disabling an enemy drone will cause much less collateral damage to nearby civilians given that there will be much less explosive material and fragmentation potentially quite dangerous for noncombatants.

The third increment, Youngman said, would be the eventual replacement of the Stinger missiles in the system for both mounted and dismounted operations.

All of this has required some minor adjustments within the Stryker vehicle in the realms of sensing, targeting, computing and fire control systems, something which Youngman explained is going smoothly and requires only minor adjustments.

“The Strykers are being modified appropriately,” Youngman said in an interview.

The Army plans to field four battalions of SHORAD-armed Strykers, but that number could increase as demand for air defense expands across the Army force. It would be unsurprising if other armored vehicles were similarly armed with a SHORAD capability.

Interestingly, the Army’s integrated support plan for M-SHORAD does not stop with innovation and production but also incorporates a specific sustainment plan, given its growing importance to the Army.

Gen. Edward Daly, the commander of U.S. Army Materiel Command, said his force was working closely with Army Futures Command Air and Missile Defense Cross-Functional Team to “ensure sustainment of the platform with a critical focus on maintenance. We are currently refurbishing vehicle-mounted launchers in support of M-SHORAD.”