This Army Unit Might Have Issues Fighting Russia in a War 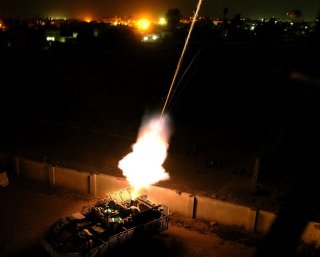 For a moment, let’s reexamine a well-known doomsday scenario through the lens of a new perspective: Russia, a tank-centric regional heavyweight for the past one hundred years, launches a sweeping offensive across eastern European nations to seize the Kaliningrad land bridge; the countries of Belarus and Lithuania are quickly overrun; the sovereignty of Poland is threatened. Meanwhile, NATO countries are scrambling to mobilize their armies. This is the scenario posited in Tom Clancy’s book, Command Authority.

In real circumstances, the U.S. military would have to deploy its units across the Atlantic Ocean; this would take some time, perhaps three weeks to build up a substantial armored force. To mitigate the lack of armor in the Baltic States, the U.S. Army keeps one armored brigade in the area on a rotational basis. That’s one armored brigade to halt the multiple combined arms regiments of the Russian military. It’s highly probable that this unit would be rendered combat ineffective very quickly. Still, it would take a while before other U.S. Army units arrive. In the meantime, the U.S. Army would commit its ground troops stationed in Germany to stop the Russian horde.

That unit is the 2nd Cavalry Regiment.

This is how the opening phases of Multi-Domain Operations or Large-Scale Combat Operations will begin; two units, one of which is a unit comprised of lightly-armored wheeled vehicles set to clash against Russian mechanized forces.

This scenario begs the question: are Stryker units properly configured to survive against a tank-heavy force?

The Current State of Stryker Affairs

The U.S. Army has made some strides to improve the lethality of the Stryker combat vehicle. First and foremost, the Army is retrofitting 83 Strykers Infantry Carrier vehicles with the XM813 30mm auto-cannon. This is an improvement over the .50 caliber machine gun that is used as the standard configuration. The 30mm cannon will perform well when Strykers encounter armored personnel carriers, particularly if loaded with armor-piercing rounds. However, in the European scenario, Russian forces will lead an assault {when in battle formation} with tanks, their most powerful weapon; the 30mm cannon will prove too weak for such a confrontation.

Sadly, the U.S. Army is delaying the integration of Javelin anti-tank missile onto the Stryker combat vehicle for three years, because of interface problems with the CROWS weapons control system. This may arrive too late.

Currently, within the Cavalry Troops, there are sixteen M1127 Stryker Reconnaissance Vehicles (per troop), none of which have an anti-armor capability. Within each Infantry rifle company, there are three M1128 Mobile Gun Systems and fifteen M1126 Stryker Infantry Carriers; a protective ratio of 1:5 (one anti-armor vehicle to protect five Infantry vehicles).

The 220 combat-coded Stryker vehicles in the brigade are woefully under-protected in a high-intensity conflict. Therefore, the composition of the Stryker BCT composition needs to evolve in order to survive.

At the outbreak of hostilities in a full-spectrum multi-domain fight, the enemy will attempt to disrupt U.S. decisionmaking abilities. For U.S. Army ground units, the “sensor-shooter” connection relates to the headquarters-to-maneuver-unit connection. Thus, enemy units will deliberately attempt to sever communications between US maneuver units and their parent headquarters. Hence, to ensure their survival, we must give company-level commanders all the tools necessary to operate independently of their parent headquarters.

This new company-level unit must be multi-faceted, containing all the elements of combined arms. A Stryker Combined Arms Company should contain:

I proposed a similar re-organization of mechanized forces in a previous article; this reorganization will create a balanced force, while providing better vehicle protection when encountering a mechanized enemy. This Combined Arms Company would have a protective ratio of 1:2 (one anti-armor vehicle to protect two Stryker vehicles), giving the company commander a decisive anti-armor capability, particularly when Mobile Gun Systems fire discarding sabot rounds.

The Combined Arms Company will be able to reconnoiter to find the elusive enemy, and bring sufficient firepower (both indirect and anti-armor) to neutralize an enemy formation. This company will be ideally suited for hit-and-run-style tactics, which is what a Stryker company will need to survive against Russian tanks in a European theater. From a leadership perspective, the Combined Arms Company will teach the company commander how to operate in a tactically self-sufficient manner, thereby making him a more adept field commander in his later years.

Pushing combat power down to lower levels of responsibility will come at a cost. However, in light of restricted budgets, the overall size of the Stryker BCT will not be allowed to expand. So, we seek to keep the total number of direct-combat vehicles at 220 for the brigade. But this will necessitate the retrofitting of more Strykers to the reconnaissance and anti-armor configurations; for the sake of argument, either anti-armor variant may be used interchangeably (either the M1128 Mobile Gun System or M1134 Stryker Antitank Guided Missile Vehicle are acceptable for this model). Moreover, no change to the headquarters or support units are required.

One alternative in acquiring the Strykers in a timely manner is to transfer eighteen recon and twenty-nine anti-armor vehicles from the 3rd Cavalry Regiment, which is currently stationed at Fort Hood, Texas. This would quickly improve the combat posture of the 2nd Cavalry Regiment in Germany, while buying the Army enough time to re-configure the 47 transferred Infantry carriers (which had belonged to 2nd Cav Regt). In this way, the 2nd Cav Regt can become combat-ready in short order, while the 3rd Cav Regt would have more time to re-adjust to its new role. Both units, however, would benefit from more combat power capability.

The reorganization of a Stryker BCT necessitates the setting aside of past dogmas; new thinking must rise to the occasion. Accordingly, the structure of the brigade must evolve. A Stryker BCT currently has four maneuver battalions (1 Cavalry + 3 Infantry battalions, each is comprised of three maneuver companies). However, to survive against a heavy mech enemy, I propose a Stryker BCT consisting of three newly-formed battalions; two battalions would consist of four Combined Arms Companies each; the third battalion would have three Combined Arms Companies. Each company would expand from eighteen to twenty vehicles, but each Combined Arms Company would possess a heavier anti-armor capability. Overall, the Stryker BCT would have eleven maneuver companies, not thirteen companies as is the present case.

This results in the brigade losing one battalion-command billet, and two company-command billets. But the end result is more robust units, led by officers who will be more insightful in the application of force and survival.

The U.S. Army must remain cognizant that its Stryker BCT, namely the 2nd Cavalry Regiment, is positioned to face a heavily mechanized enemy in the European theater. Equipped with light wheeled vehicles, the 2nd Cav Regt must be re-organized to vastly increase its anti-armor firepower. With the formation of Combined Arms Companies, the U.S. Army will field units specifically optimized to employ hit-and-run-style tactics to ensure its own survival. One benefit from this transition will be deeply knowledgeable officers, who will be in depth tacticians. Implementing this reorganization will enable the Army to better face future threats.

Samuel Arlington Page is a twenty-year veteran who served in Ranger, Cavalry, and Airborne units. He has written a novel about large-scale combat named Freedom’s Promise: The American Invasion of Mainland China, available on Amazon.com.