The Army Wants a New Generation of Robotic Fighting Vehicles 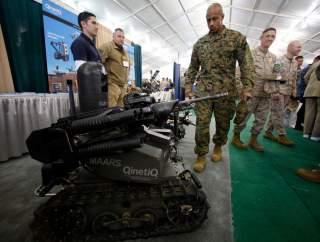 "Optionally-manned" might be the new buzzword of the year for the Pentagon. This term denotes a system that can be operated like a traditional combat vehicle with a crew onboard—or operated remotely as a drone. Though optionally-manning in the past has largely referred to plans for a conceptual sixth-generation of stealthy networked fighter jets, the Association of the United States Army (AUSA) defense exposition that took place this October in Washington has shown that the Army is committed to the concept for its own future armored vehicles.

However, these are specialized systems designed to undertake specific high-risk tasks. What’s notable about the new crop of ‘optionally-manned’ systems is that they include mainstream land warfare systems at the heart of a mechanized army.

The most notable is the Army’s project to replace the M2 Bradley infantry fighting vehicle, which can both carry a small infantry squad into battle and dish out heavy firepower with its turret-mounted autocannon and anti-tank missile launcher. While the Army is planning on creating heavier, faster, and more heavily armed and armored M2A4 and M2A5 models of the Bradley, it is also set to begin a competition late in 2019 for an Optionally Manned Fighting Vehicle, (or Next Generation Combat Vehicle) to succeed it.

For example, General Dynamics showed off at AUSA a Griffon light tank prototype originally conceived for the Army’s Mobile Protected Firepower competition, now remodeled to a Griffon III configuration including a troop compartment, a 50-millimeter autocannon for busting other medium or light armored vehicles and covered with puzzle-like hexagonal armor system.

A difficult to avoid aspect of land warfare operations is that enemy positions are frequently only discovered after they have opened fire on advancing units—an unavoidably risky proposition while performing a Movement to Contact scenario, or an assault on well-concealed enemy positions. For these dangerous missions, a commander could deploy vehicles remotely, forcing adversaries to open fire and expose their positions without risking his troops' lives.

The new robotic combat vehicles may themselves deploy their own small flying drones to scout ahead for enemy forces, effectively serving as bullet catchers to spare the more valuable mothership from having to ride ahead and spring a deadly ambush. Small Switchblade kamikaze drones mounted on armored vehicles have also been proposed to offer dual functionality as lethal impromptu missile batteries.

Also keeping with the ‘risky armed reconnaissance theme’ are proposals for various substitutes for Humvee scout vehicles, which have little in the way of life expectancy if spotted by a peer opponent. Examples at AUSA included the optionally-manned Polaris MRZR all-terrain vehicle and semi-autonomous vehicles such as the tracked Titan scout armed with a .50 caliber machine gun, the wheeled Hunter Wolf “killer golf cart,” and the machine-gun-and grenade-launcher toting MAARS robot being tested to backup Marine squads. (Semi-autonomous vehicles can be remotely controlled but are also capable of performing certain tasks without human input.) You can see photos of the robot scout vehicles here.

The Army is also keen on robot trucks. The concept is less Optimus Prime and more about cost-efficiently delivering supplies to troops without risking the lives of truck drivers. Combat experience attempting to resupply outposts in Afghanistan has shown that supply convoys are exceptionally exposed to mines and ambushes, requiring heavy escort forces which in turn take casualties and cause delays for medical evacuation and vehicle recovery, further impeding what should have been straightforward supply run. Expendable drone trucks thus could offer a way out of that vicious logistical spiral.

A recent article by Michael Gross in The Atlantic has highlighted how the Defense Advanced Research Projects Agency (DARPA) has been conducting extensive research into using neural-interfaces to allow soldiers to effectively ‘mind-control’ drone-systems remotely. For example, after first developing a neurally-linked prosthetic arm for a quadriplegic woman, DARPA followed up in 2015 with a neural-link allowing the same woman to pilot an F-35 flight simulator using thought alone. If such technology can be genuinely made cost-efficient and adapted to practical operational weapon systems, the science-fictional-seeming concept of mind-controlled robotic fighting vehicles could become a reality by the mid-twenty-first century.

However, while minimizing the human cost of war is undeniably appealing, a risk of robotizing land warfare systems is it may incentivize riskier operations and more frequent resort to violence. Such a pattern can already be observed in the wide-scale use of drones as assassination weapons for missions manned aircraft would have been too costly or too at risk to fly on.

However, robotic land warfare systems are burdened by an obvious Achilles heel: the command links controlling them. These could easily be disrupted via jamming—and Russia especially has cultivated expertise in ground-based electronic warfare which it has operationally tested both in its semi-covert war in eastern Ukraine, as well as against U.S. forces in Syria. A partial remedy might be the development of additional semi-autonomous features (though this may force one to give robots decision-making power on terminating human lives) and perhaps hardening circuitry versus electromagnetic pulses and directed energy weapons.

Worse, robotic command links could be hacked—again, an arena in which Russia and China, and numerous non-state actors besides, have more than demonstrated their proficiency. Especially worrisome in this regard is a recent report by the GAO finding that the Pentagon's advanced multi-billion dollar networked computer systems, such as those on the F-35 fighter jet as well as the upgraded E-3G radar planes, were easily hacked within a few hours using basic tools and lacked all but rudimentary cyber-defense measures. In fact, many of the systems had not even had their default passwords updated, a newbie mistake.

Given that the Pentagon has been warned about cyber-vulnerability for over a decade but continues to flunk cybersecurity tests, its ability to dramatically improve cybersecurity practices is open to question. The potential havoc that could be wreaked by hacking large numbers of poorly-cyber-secured land warfare systems simultaneously is a disconcerting prospect.

With these considerations in mind, though the Army is moving towards introducing a new generation of robotic vehicles that can be operated remotely, armored vehicles crews will likely continue to risk their lives on the battlefield in the near future.