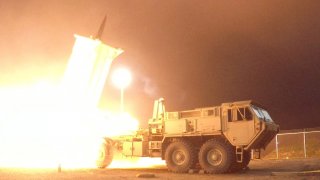 The Army is introducing a new, paradigm-changing targeting technology for its rapidly advancing Precision Strike Missile (PrSM), a first-of-its-kind five-hundred-kilometer long-range land weapon. This weapon will be designed to outrange U.S. adversaries and offer up new tactical attack options.

Earlier this year, the new targeting technology completed a successful “captive carry” test when it flew aboard an aircraft to track and attack multiple moving targets. The new guidance system is likely to progress quickly now that the Army has moved the PrSM into the next developmental acquisition phase, which will likely involve a new range of testing and prototyping by defense contractor Lockheed Martin.

In-flight maneuverability could also be an advantage associated with the new seeker, as it might enable a data link to receive new targeting information while in flight. This kind of technological capacity, should it come to fruition with weapons such as the new PrSM, would advance rocket attack options beyond being a fixed-point to fixed point location. For example, the Guided Multiple Launch Rocket System was on the cutting edge of precision ground war when first introduced years ago. The GPS-guided weapon could pinpoint targets with great precision from distances up to eighty kilometers. However, the PrSM can massively improve striking ranges with equal precision. Additionally, it might bring unprecedented levels of maneuverability against moving targets.

There is a cross-domain element tied to all this. These innovative technologies are likely to enable a land-launched PrSM weapon to track and destroy enemy ships at sea. A weapon that was once used purely for land attack or surface-to-surface strike could eventually have multi-domain tactical implications if it were given the ability to hit moving targets and shift course in flight.

For instance, the PrSM could be successful against enemy radar, air defenses or even aircraft carriers hundreds of miles offshore. It may not be able to achieve nine hundred miles of distance like a Tomahawk missile. However, it may draw upon targeting technologies that provide an impact similar to new Tomahawk missile variants. For example, the Navy’s Maritime Tomahawk can change course in flight to attack moving targets at sea, a technological possibility historically not thought of for a cruise missile primarily used in the opening salvo of a military campaign against fixed targets.

Existing Block IV Tomahawks use a two-way data link to identify targets and operate with a “loiter” ability to hit targets as they become available. New guidance systems that enable moving-target strikes could bring additional attack options to ground commanders operating in an increasingly multi-domain environment. Military officials are seeking to use land weapons to attack ocean targets and vice-versa as Defense Department war planners aim to refine joint-attack possibilities and anticipate the complex combat environment that will likely characterize modern warfare.

While the PsM would be useful in full-scale mechanized combat, the precision attack proved worthwhile in counterinsurgency attacks. This was clear when Taliban and Iraqi insurgents deliberately blended in with innocent civilians among local populations. Under these circumstances, precision attacks became necessary, even vital, to U.S. combat success. It was during the land wars in Iraq and Afghanistan that the Army first deployed breakthrough kinds of precision-guided land-attack weapons such as GPS-guided Excalibur 155-millimeter artillery. This type of precision was introduced during counterinsurgency warfare, but a capacity to hit moving targets with pinpoint precision is also relevant to major warfare scenarios given the increase in global urbanization and the need for armored forces to advance through and occupy cities.

While little information about the technology is available, it’s clear that multi-mode “seekers” on other weapons can blend various targeting technologies into a single application, often merging things like radio frequency guidance, laser spotting or infrared sensing. Perhaps some type of gyroscope, inertial measurement or artificial-intelligence-enabled data exchange will introduce to various weapons the ability to make instant targeting adjustments.

The technology behind new seekers seems to relate to a concept of networking given that, at some point, would allow military weapons to receive targeting input from drones, aircraft, forward-positioned controllers or even surface ships.