Attention: Here’s What it Takes to Join SEAL Team Six 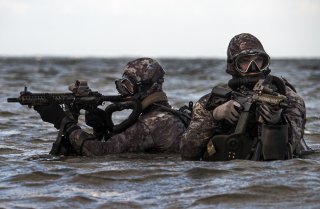 If you want to send off the best from the U.S. military, you can count on Navy SEALs. But if SEALs need an even more elite team, they send off the SEAL Team Six.

That fact alone should give you the necessary hint to understand how extremely difficult it is to become a part of that much-vaunted group.

First off, you should know that the Naval Special Warfare Development Group (NSWDG)—abbreviated as DEVGRU and commonly known as SEAL Team Six—is the U.S. Navy component of the Joint Special Operations Command (JSOC). SEAL Team Six is regularly tasked with performing the most complex, classified, and dangerous missions directed by the upper tiers of the U.S. military.

If this is still piquing your interest, then here is a quick rundown on how to attain your dream goal of joining this exclusive squad: you must be male, at least twenty-one years old, already be an active member of a SEAL Delivery Vehicle (SDV) or SEAL Team, have at least five years of experience on a SEAL Team, and have served at least two deployments.

The key to this entire process is that you are currently part of the SDV or SEAL Team, which already takes an incredible amount of mental and physical strength to achieve.

Be aware, though, that out of roughly a thousand candidates who start the SEAL training program each year, only about 25 percent succeed. And know that all roads to becoming a Navy SEAL end at BUD/S—Basic Underwater Demolition/SEAL Training. There are several avenues to reach that point, but you must finish BUD/S before you can proudly call yourself a SEAL.

If you do reach Phases 1, 2, and 3 at BUD/S, then this is when it gets really serious—and where many students get injured or even throw in the towel. Here, you will regularly confront challenges like four-mile timed beach runs, two-mile ocean swims, BUD/S obstacle course, log PT, hundreds of reps of pushups, pullups, and ab exercises. Then there is drown-proofing, life-saving, and underwater knot-tying to keep your anxiety at sky-high levels.

And don’t forget about Hell Week. At this point in training, you will only get about four hours of sleep in total during a five-and-a-half-day period. The days are long, as much as twenty hours at a time, and you’ll have to push yourself to run, swim, and paddle more than two hundred miles. But do take comfort in knowing that if you make it past this week, you’ll more than likely have what it takes to become a Navy SEAL.

If you’re still on your feet, then you have finished BUD/S but your SEAL training is not over. After BUD/S graduation, you head off to SQT—SEAL Qualification Training. This advanced training program takes those who graduated and forms a team that can operate in water, underwater, from planes and helicopters, ropes and parachutes, boats, and on foot.