B-21: The U.S. Air Force’s New Stealth Bomber Is Right on Schedule 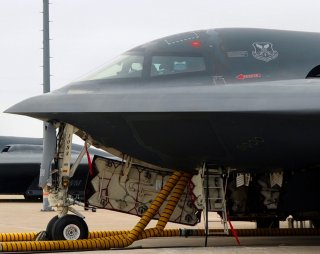 The United States’ newest bomber, the B-21 Raider, is moving closer and closer to production. Just recently, Dr. Mark Esper, the current Secretary of Defense, visited the facilities where the stealth bomber is to be manufactured by Northrop Grumman and took a look at the first airframe of the program being built.

The B-21’s primary mission will be strategic nuclear deterrent, and once in service the B-21 will be the world’s most advanced nuclear strategic stealth bomber, Esper explained. “nuclear modernization is a department priority–especially in our efforts to implement the National Defense Strategy. We have made great strides in ensuring the strength and reliability of our nation’s nuclear deterrent.”

Though not currently in production, digital mock-ups of the bomber show that it superficially resembles the older B-2 Spirit stealth bomber. Both airframes use a flying wing design to minimize their radar cross-section, and both appear to have their engines buried within their airframes to reduce thermal emissions. Neither plane has a tail assembly, and stability during flight is controlled by an advanced digital fly-by-wire system.

Though outwardly similar, the newer B-21 “incorporates lessons from past programs” for improvements in several areas focused on ease of maintenance and open systems architecture that allow the stealth bomber to be modified to better face future challenges. While extremely capable, the B-2 Spirit bombers require extensive maintenance support, including specialized climate-controlled hangars, which limits the number of locations where the bombers can deploy.

Shortly after the Air Force announcement, a trio of B-2 bombers were tracked heading to the remote Diego Garcia outpost in the Indian Ocean. The deployment comes just before an expected naval exercise by China’s People’s Liberation Army Navy and highlights just how important stealth bombers are to the United States in countering China in the Pacific. Among other objectives, the PLAN is expected to simulate an amphibious assault targeting Taiwan.

The Raider is expected to make its way onto Air Force bases sometime in the mid-2020s. General Timothy Ray, commander of Air Force Global Strike Command and Air Forces Strategic-Air, U.S. Strategic Command said that the progress he saw during the visit with Dr. Esper “further adds to my confidence that the B-21 Raider will preserve our long range strike and penetrating bomber capability."

Initially, the Air Force had stated that a December 2021 date would be the first test flight for the B-21 platform, though this has obviously now been pushed back. Despite the slight delay, make no mistake—the Raider program is moving right along.