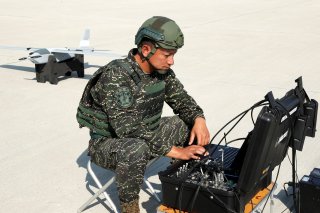 In May, media reports stated that People’s Liberation Army (PLA) Marines were staging an exercise on Hainan Island that was designed to simulate the takeover of the Dongsha Islands. The large exercise reportedly involved a number of PLA Marines and support equipment including helicopters, landing equipment and other ships.

Alternatively called the Pratas Islands, the small group of reefs, banks, and small islands are administered by Taiwan, but also claimed by China. A large section of the island area is part of a Taiwanese nature reserve and is uninhabited, save for a small coast guard garrison that is said to be around 200-strong.

The Dongsha Islands, located about 400 kilometers southwest of Taiwan and just 250 or so kilometers from Hong Kong, could serve as a stepping stone for a Chinese invasion of Taiwan or for greater access to the South China Sea. Though Taipei would be extremely hard-pressed to defend the islands in the face of a concerted Chinese invasion effort, there is a plan in place.

As early as June, the first of several hundred Taiwanese Marines arrived on the Dongsha Islands to augment the coast guard contingent already in place. Like their American counterparts, Taiwan’s Marines are considered Taipei’s force-in-readiness. Highly trained and ready for deployment at a moment’s notice, the Marines on the Dongsha Islands are not ordinary Marines, however.

The South China Morning Post quoted a Taiwanese legislator familiar with the deployment as saying that the Taiwanese Marines currently stationed on the island, part of the 99th Marine Brigade, are a breed apart. This contingent “received special training from the U.S. and are capable of carrying out anti-landing and anti-parachute operations against the enemy,” training clearly designed to aid Taiwan in defending against a Chinese annexation.

Local geography is not in Taipei’s favor. The Dongsha Islands are much closer to mainland China than they are to Taiwan. Though the 99th Marine Brigade’s specialized training would no doubt be of great utility for an island defense, successfully beating back a PLA Navy invasion force is likely out of the question. In a best-case scenario, the combined coast guard-Marine contingent would probably hope to hold out long enough to get relief from the Taiwanese or perhaps American Navy.

As I’ve previously written, recent advancements in Taipei’s ballistic missile program might not be great enough to win a fight against China, but could pose enough of a cost in lives and treasure to give Beijing pause for thought—that and the 99th Marine Brigade.