The B-52 Bomber: Getting Ready to Carry Nuclear-Armed Cruise Missiles? 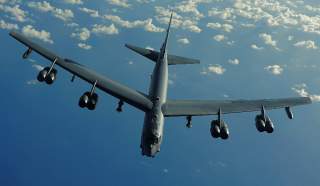 The Air Force is now arming its fleet of B-52 Bombers with prototype nuclear-armed cruise missiles to prepare the aircraft for the possibility of launching the Long Range Stand Off (LRSO) weapon.

Through a $250 million deal, the Air Force will work with B-52 manufacturer Boeing to build missile carriage hardware and software, and “test” LRSO integration.

The Air Force has been working with industry on prototyping and design work on the emerging Long Range Stand-Off weapon nuclear-armed cruise missile, set to enter into a new phase of construction by 2022, service officials said. Raytheon and Lockheed, are now working on a $900 million Technology Maturation and Risk Reduction deal for the LRSO.

Due to emerging nuclear weapons threats, the Air Force now envisions an operational LRSO by the end of the 2020s - as opposed to prior thoughts that it may not be ready until the 2030s.

Air Force officials tell Warrior Maven that plans to move into the Engineering and Manufacturing Development phase are on track for 2022.

The LRSO will provide an air-launched component to the Pentagon’s current wish to expand the attack envelope possibilities for its nuclear arsenal; the NPR calls for the addition of a new low-yield submarine-launched nuclear-armed cruise missile.

A cruise missile armed with nuclear weapons could, among many things, potentially hold targets at risk which might be inaccessible to certain stealth aircraft, given the growing pace at which modern air defenses are able to detect a wider range of aircraft - to include the possibility of detecting some stealth bombers.

As a result, senior Air Force leaders continue to argue that engineering a new, modern Long-Range Standoff weapon with nuclear capability may be one of a very few assets, weapons or platforms able to penetrate emerging high-tech air defenses. Such an ability is, as a result, deemed crucial to nuclear deterrence and the commensurate need to prevent major-power warfare.

The LRSO will be developed to replace the aging AGM-86B Air Launched Cruise Missile or ALCM, currently able to fire from a B-52. The AGM-86B has far exceeded its intended life span, having emerged in the early 1980s with a 10-year design life, Air Force statements said.

Unlike the ALCM which fires from the B-52, the LRSO will be configured to fire from B-52 and B-21 bombers as well, service officials said; both the ALCM and LRSO are designed to fire both conventional and nuclear weapons.

Configuring the B-52 to fire the LRSO is also aligned with the current Air Force effort to reconfigure the aircraft’s weapons bay. In recent years, the historic B-52 bomber has been able to carry JDAM weapons externally, but through a currently ongoing Internal Weapons Bay Upgrade, the aircraft will be able to internally house some of the most cutting edge precision-guided Joint Direct Attack Munitions and Joint Air-to-Surface Standoff Missiles, among others, service platform developers told Warrior Maven.

Pilots and B-52 modernization experts have said that having an increased internal weapons bay capability affords an opportunity to increase fuel efficiency by removing bombs from beneath the wings and reducing drag.

B-52 weapons developers have added that a second increment, to finish by 2022, will integrate more modern or cutting-edge weapons such as the Joint Air-to-Surface Standoff Missile, or JASSM, JASSM Extended Range (ER) and a technology called Miniature Air Launched Decoy, or MALD. A MALD-J “jammer” variant, which will also be integrated into the B-52, can be used to jam enemy radar technologies as well.