The B-52 Stratofortress Is Getting a New Rolls-Royce Engine 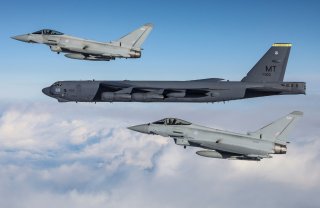 The U.S. Air Force's iconic B-52 Stratofortress bomber will remain the workhorse of the bomber fleet for decades to come. Even though B-52s are far older than the crews that fly them, the bombers have been steadily upgraded. As part of the efforts to keep the bombers flying, the airframes will be equipped with the "Rolls-Royce" of aircraft engines.

That's actually not hyperbole; the Cold War-era bombers will get a fresh lease on life in the form of the latest F130 engines from Rolls-Royce North America.

The Air Force announced last September that Rolls-Royce had been awarded a $2.6 billion Commercial Engine Replacement Program contract to keep the B-52 flying into the 2050s. By that time, some of the airframes will have been in service for approximately 100 years.

Proven Engine For a Proven Platform

The new engines are seen as a significant upgrade from the current Pratt & Whitney-made TF33 engines, which date back to the early 1960s. The F130 is a well-tested and proven engine, and the platform has accumulated more than twenty-seven million engine flight hours.

"The F130 is the perfect fit for the B-52 with proven reliability, superb life cycle cost, and low integration risk," the engine's manufacturer stated when it was awarded the contract. "A variant of the Rolls-Royce engine selected to power the iconic B-52 is already in service with the USAF around the world, powering both the C-37 and E-11 BACN aircraft."

Rolls-Royce will utilize state-of-the-art digital engineering tools to best determine how to incorporate the engines in the aging bombers. The engine maker has already created digital maps of the massive bombers, and that has allowed engineers to map models of the new engines to conclude how they would interact with other components and systems.

Various digital design techniques, which will build on the methods that helped accelerate the development of other recent aircraft, could help streamline the process for upgrading the B-52, Defense News reported. There have been no conflicts between parts or systems so far, and Boeing is working closely with Rolls-Royce to ensure that the upgrade of the Cold War bombers continues smoothly.

The two companies have also traded digital models, which has helped engineers ensure that the F130 will fit precisely inside the B-52 nacelles and to determine where newly added components can be placed.

"That's really what you want in this phase, is to figure it out sooner rather than later, before you go to full-rate production," Candice Bineyard, director of defense programs at Rolls-Royce, told DefenseNews. "So we're seeing those benefits already."

While the program is moving along, it won't be until the fourth quarter of this year that Rolls-Royce will begin the testing of its engine prototypes at NASA's Stennis Space Center in Mississippi. That will allow engineers to see how the F130 will operate in the B-52’s nacelle. Once the upgrades are completed, the Stratofortress bombers will be ready for another quarter-century of operations.