Back to the Future: How the Army is Preparing for Another Pacific War 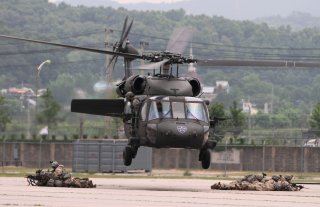 Lingering just beneath the surface of the U.S. Army’s massive focus on innovation and land war modernization, there is a distinct and sharply focused initiative to explore new technologies and tactics relevant to the Pacific theater.

The Army’s presence in the Pacific is far more substantial than many realize; currently, Army forces are deployed to South Korea, Japan, Hawaii, Guam, and Australia. This force structure has fortified the U.S. deterrence posture and raised the prospect that any act of aggression will be met by a multinational land force capable of major force-on-force mechanized conflict. However, alongside conventional deterrence aimed at China and North Korea, the Army’s focus in the Pacific has taken on a multi-domain focus to include Air-Ground Task Force training alongside the Air Force and preparations for sea-land operations with the Navy.

“We are looking at a maritime scenario in which there are non-contiguous lines of supply. There are all kinds of island issues and rains and geometry issues in that theater. It’s a whole different equation where the Army has a role to play.  You can look at history and see that the Army had a large number of soldiers in World War II in the Pacific,”  Lt. Gen. Thomas Todd, Chief of Innovation, Army Futures Command, told The National Interest in an interview.

For instance, the Army has practiced firing artillery from surface ships, landing helicopters on warships, and adjusting tactics and maneuvers to enable ground-fired weapons to attack targets at sea. All of these capabilities are part of the Army’s contribution to the Pentagon’s Joint All Domain Command and Control concept in which all services operate using a common interface to enable multi-domain, joint, real-time networking, targeting, and sensor-to-shooter pairing across a vast area of ocean and island territory. Todd explained that the Army’s experience securing supply lines, transportation, and equipment has been drawn upon to adapt to a maritime warfare environment where different methods of logistics security will be needed.

“We obviously play a huge role in contested logistics on land. We take that role very seriously. We are going to not only get things to the front lines but also distribute them because our troops will operate in a much more dispersed manner in the future,” Todd said.