Robotic Combat Vehicles: How the Army Maintains Dominance in Europe and the Pacific? 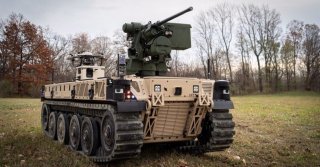 As the Army prepares to “field” prototype robotic combat vehicles to operational units next year, it is no surprise that service officials say the fast-evolving program is intended to support deterrence and combat operations in Europe and the Pacific.

At some point next year, the Army will send prototypes of its Robotic Combat Vehicle-Medium (RCV-M) to operational units for soldier-centric “touchpoint” assessments, war preparation drills, and evaluations in combat scenarios.  The Army’s RCV-M is a roughly fifteen-ton tracked, armored vehicle armed with cannons, anti-tank weapons, and advanced sensors to test enemy defenses, move to contact, attack mechanized formations and engage in “multi-domain” networked warfare.

While Army weapons developers are exploring and preparing for the full range of combat contingencies, the service clearly seems to see multi-domain advantages in both Europe and the Pacific.

Closing to contact with an enemy across the European continent would benefit greatly from forward-operating armed robotic platforms. Naturally, given the carefully upheld doctrine that humans must be “in the loop” regarding and possible use of lethal force, the robots would not fire upon enemy targets autonomously but when directed by humans performing command and control.  The impact of these robotic vehicles will be optimized by the Army’s manned-unmanned teaming technologies which enable manned platforms to operate at safer standoff ranges while forward-operating robotic weapons and sensors attack at the edge of combat.

Unmanned armed robotic vehicles could breach, test or attack the perimeter of an approaching enemy mechanized formation to send back reconnaissance footage, operate aerial drones over enemy territory, fire weapons against enemy tanks, and even control other air and ground drones.

One of the largest elements of this may fall into the area of the much-emphasized “multi-domain” concept, as the robots could greatly optimize their combat utility by sharing information in real-time with drones in the air. They could send ground-target specifics to armed aerial drones in position to strike or conversely receive target coordinates from an overhead drone in position to see advancing enemy troops.

As they are unmanned, the RCVs will not need a lot of heavy armor and can therefore be configured at a lighter weight to enable fast-moving, expeditionary operations able to carry a large payload of weapons, ammunition, and supplies to forward units under fire.

“The Army remains focused on building a multi-domain force by divesting legacy equipment that does not support future warfighting, to fund modernization of our land force capabilities,” Kelley said.